Research has shown that 56 percent of journalists have noticed a drop in PR activity from their industry contacts, with one in four complaining that PR has gone completely quiet. The research, which surveyed trade and national media professionals to get their view on how things have changed since COVID-19, found the majority of journalists are struggling to get hold of spokespeople and marketing teams, and feel that companies have become more cautious and reluctant to make media decisions.

As a result, 53 percent of journalists are receiving fewer pitches and press releases from companies or their agencies.  And, while one third of journalists are receiving the same volume of PR as before COVID-19, 27 percent felt the quality has declined. According to journalists, other common PR errors include trying to be COVID-relevant when they’re not (53 percent), not being creative (17 percent) and pitching stories that jar with the general mood of the situation (11 percent).

Ups and downs in the publishing industry

The Telegraph and The Spectator have announced they will return all the furlough money received from the Government after the titles remaining profitable during the worst months of the coronavirus crisis.

But it isn’t all good news – News UK, publisher of The Sun and The Times, last week warned of impending job losses as part of a major cost-cutting programme as the pandemic hammers newspaper sales and advertising revenue. Rebekah Brooks, the chief executive of News UK, sent an email to staff announcing that the business needed to ‘reset’ with the virus hastening the shift towards digital publishing.

On Wednesday, the Guardian also reported that Dennis Publishing, owner of The Week, Minecraft World and Viz, has put a quarter of its 480 UK staff into a redundancy consultation process.

Newspaper publishers have benefited from record digital audiences as readers crave news on the coronavirus. However, with businesses closed and many advertisers keen to steer clear of running promotions around content relating to the pandemic, publishers have suffered a significant decline in print sales and advertising revenue.

This comes as Ofcom’s tenth weekly study on how the public are acting on news and information during the pandemic, found that fewer people are repeatedly following news about COVID-19 now.

Former Conservative Culture Minister Ed Vaizey called for the Government to protect the media industry in a piece in The Telegraph last week. He warned that publishers are currently at risk due to the ongoing loss of advertising revenue, not just because of the pandemic, but also to big US-based tech firms, which have ‘little interest’ for what counts as the ‘public good in the UK’. Vaizey pointed to France and Australia, where online platforms will be required to compensate publishers for hosting their content.

The Competition and Markets Authority (CMA) has already pointed out that the online advertising market is stacked in favour of the tech giants at the expense of British publishers, with Google and Facebook owning a 60 percent market-share duopoly. Big tech’s analytical power generates precisely targeted adverts which give them a strong competitive advantage, and news broke last month that Microsoft is replacing real journalists with artificial intelligence software.

Lexington is supporting an upcoming Women in Journalism “In Conversation with” event with Roula Khalaf – the FT’s editor – on Tuesday 16th June at 6pm. To RSVP please email communications@lexcomm.co.uk. 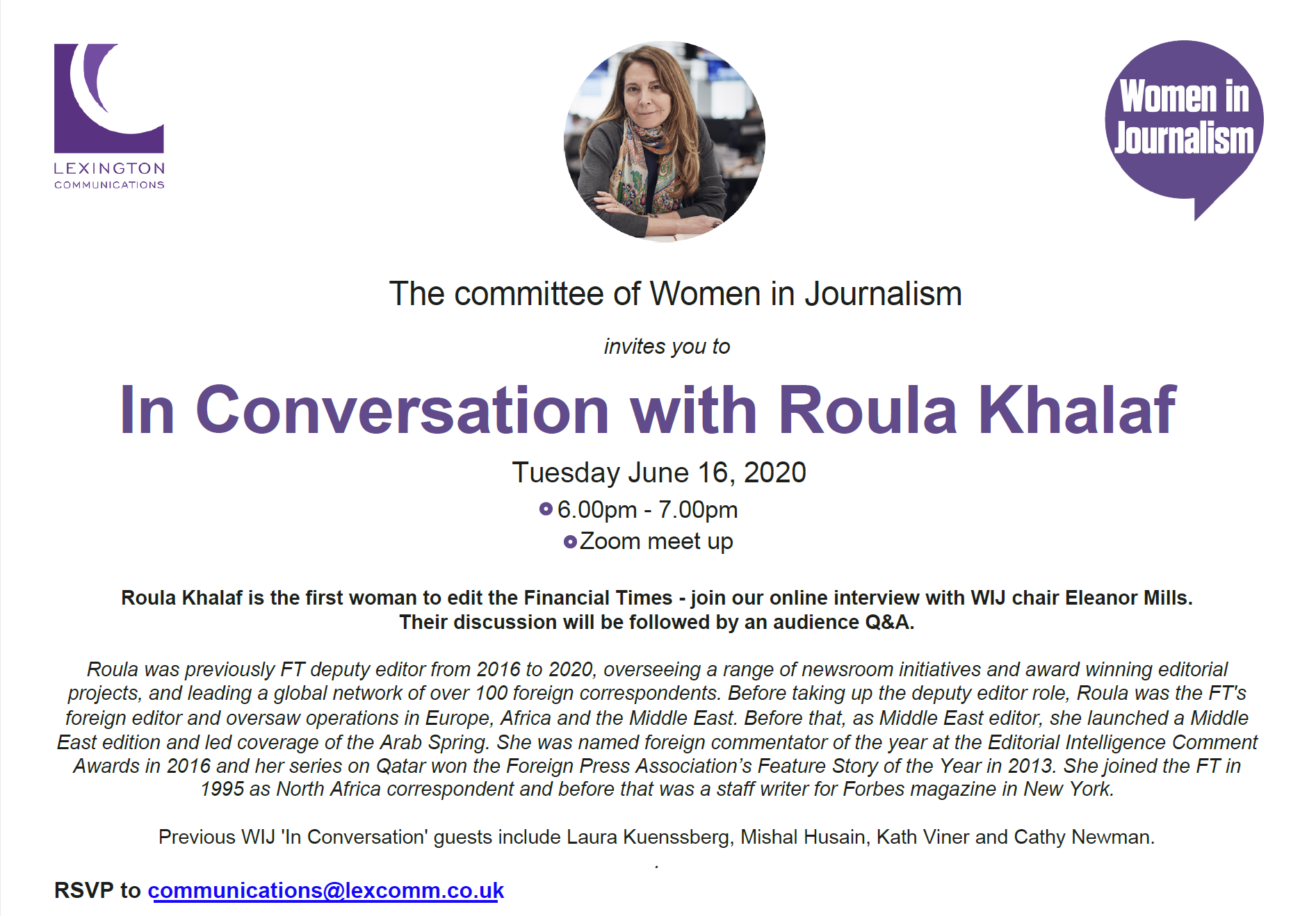 Emily Sheffield was this week announced as the new Editor of The Evening Standard, replacing George Osborne who is moving to Editor-in-Chief. She is tasked with making the publication a digital first operation, an extremely difficult challenge for a title so heavily dependent on print for its income. As an ad-funded title reliant on footfall, the Standard has not escaped being hit by the pandemic.

Sheffield will also remain the Director of another title she launched, This Much I Know. She previously worked as Deputy Editor of UK Vogue, and at the Standard for five years, under Max Hastings, and is currently a Standard columnist, and sister-in-law of David Cameron.

Very proud to be the announced as the new Editor of the Evening Standard. It has been a core part of my daily life since I moved to London aged 18. And spent five formative years there as a young journalist in my 20s. @standardnews @mrevgenylebedev @George_Osborne

Aled Haydn Jones has been appointed as the head of BBC Radio 1. Aled was previously head of programmes on the radio station and has also previously served as producer on the Chris Moyles Breakfast Show.

Lucy Jones will soon be joining the Mail on Sunday as a Features Writer. She is currently a Reporter at The Sun.

Ben Hill has joined The Sun as an Online Reporter, based in London.

Nigel Farage has stepped down from his LBC radio show with immediate effect. In a tweet posted on Thursday, LBC explained that the former UKIP leader’s contract was due to expire ‘very shortly’ and his departure was agreed following discussions. News of the problematic politician’s departure has been welcomed online, with fellow presenter James O’Brien, tweeting: ‘We got our station back.’