YouGov poll suggests trust in the media has not collapsed

Pollsters at YouGov have regularly asked the public whether they trust different groups to ‘tell the truth’ – doctors, judges, teachers, police officers, and journalists. In its latest poll, conducted on 26th and 27th April, 47 percent of people expressed trust in BBC News journalists to tell the truth. Perhaps surprisingly, this number is actually up slightly from when the question was asked during the election campaign in December last year (44 percent) and just a point below where it stood in March before the Government announced a shutdown in response to the COVID-19 outbreak (48 percent). Meanwhile, trust in journalists at ITV and ‘upmarket’ newspapers, such as The Times, has similarly been largely stable over the past six months – between 41 to 45 percent and 34 to 40 percent respectively. 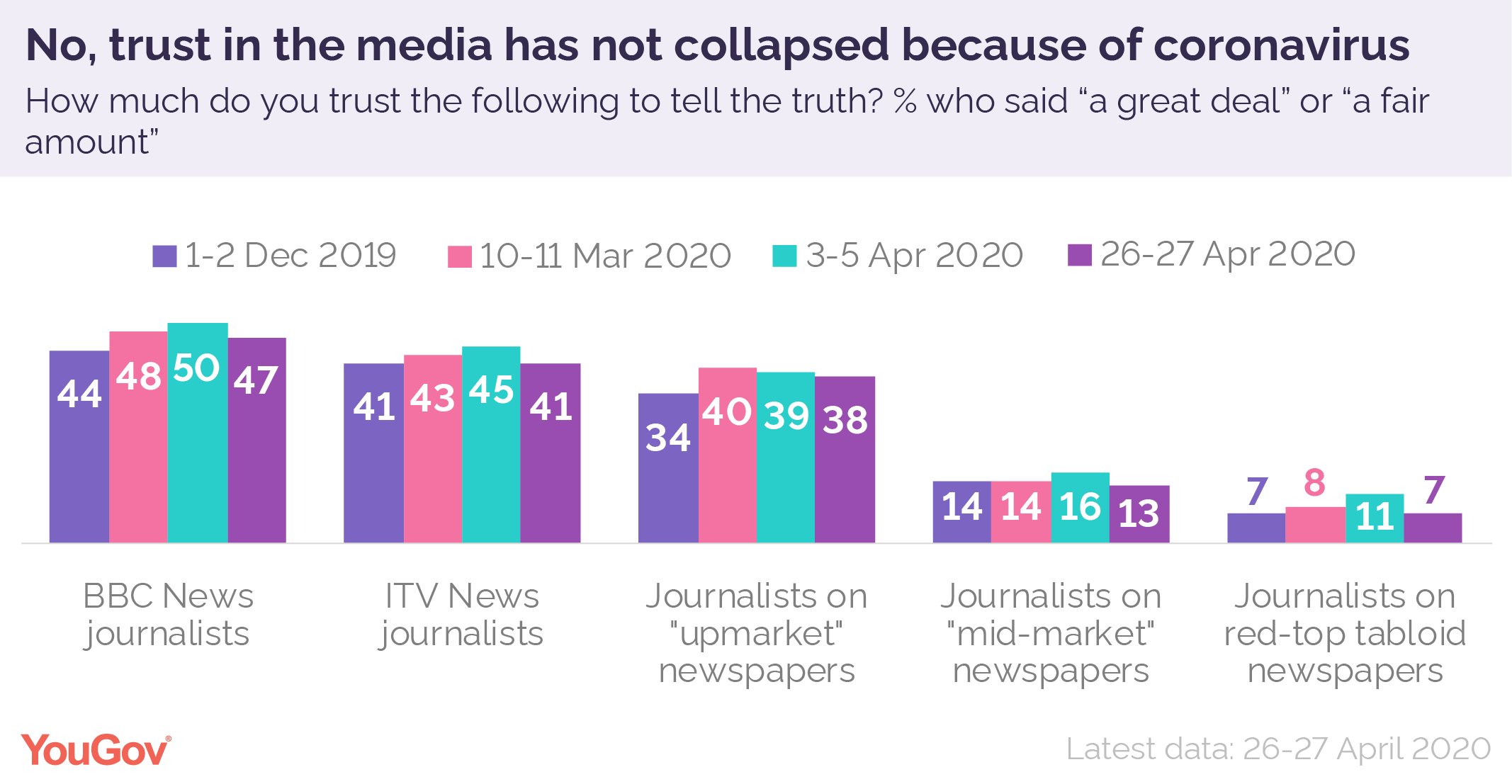 What this suggests is that there has been ‘no collapse’ in public trust in news media during the coronavirus outbreak.

This comes the same week as The Guardian revealed its coverage of the coronavirus outbreak is considered to be substantially better than that of any other British newspaper, according to a University of Oxford study looking at the UK population’s attitudes to news during the lockdown.

The Reuters Institute for Journalism launched an Independent News Emergency Relief Coordination (INERC) on Friday to help coordinate funders for independent news media better, and to understand where the need is greatest. INERC aims to improve information on the need for, and supply of, emergency funding relief, to ensure its more effectively distributed globally. The study also wants to avoid ‘a situation where a few well-known news media get a lot of support from many different funders’ while ‘many more equally important but less well known get little or no support’. The purpose of the group is to:

Heard it on the Radio

Ofcom has announced a Community Radio Fund to help fund the core costs of running Ofcom-licensed community radio stations. For 2020-21, grants will be provided as emergency cash funding to support stations facing severe financial difficulty due to COVID-19. Local radio is an increasingly important part of the UK radio landscape with around 300 not-for-profit stations, staffed largely by volunteers, broadcast to around a million listeners per week. But advertising revenues, which make up around 25 to 30 percent of a community station’s income, have dropped significantly as a result of the pandemic. Community radio stations at risk of closure will now be able to bid for cash grants through the £400,000 Fund, with the window for applications opening today and closing at 5pm on 11th May 2020.

UK news publishers may be struggling with their own finances, but that hasn’t stopped them raising £7m for good causes related to coronavirus fight https://t.co/R4mPgnu5qL

Sky News has appointed ex-ITV Deputy News Editor Tim Singleton as Head of International News. He joins after three years as Director of Communications for the Department for International Development (DfID). On Twitter, Singleton said it was ‘time to move on’ and head ‘back into broadcast journalism’.

Duncan Barber has joined the Economist Radio as a Senior Producer. He previously worked as a researcher on BBC Radio 4’s Today programme.

Mike Soutar is stepping down after eight months as the Evening Standard’s CEO at the end of May to ‘pursue other business interests’.

Danielle Hayden is now a journalist working on Channel 4’s The Steph Show. She previously worked on the BBC’s Breakfast programme.

Rosa McMahon is now a Producer on ITV’s Lorraine programme.