These numbers don’t include the many millions who saw it online, meaning it’s not unreasonable to guess half the country was watching.

This comes as Sky News has analysed data around the 121 Downing Street press conferences broadcast over the summer, breaking down the stats on who spoke most often, who spoke the least, and the representation of different groups. Analysing those briefings gives an insight into Government communications during the pandemic: when they were and who appeared at them, as well as who was allowed to ask the questions. Out of the 40 people appearing in different combinations, there were just five occasions where women outnumbered men. An all-male line-up was overwhelmingly preferred, occurring 74 times – equivalent to 61%.

Google reinstates TalkRADIO’s Youtube channel after being accused of ‘censorship’

TalkRADIO’s YouTube channel has been reinstated after the Google-owned platform temporarily took down the radio brand’s videos last week for violating its guidelines for COVID-19 content that “explicitly contradicts expert consensus from local health authorities or the World Health Organisation”. YouTube has a “three strikes” policy under which it reserves the right as a private media company to ban content providers from the platform for breaches.

Whilst the company did not specify which particular videos had prompted YouTube to remove talkRADIO’s channel, in September, Friday drivetime presenter Mark Dolan went viral for protesting against the wearing of face masks by cutting one up live on air. Ofcom has not made any rulings against the radio brand over alleged COVID-19 misinformation selection of voices and opinions. talkRADIO is part of Wireless Group, the radio company that also owns talkSPORT. News UK, the publisher of The Sun and The Times, bought Wireless Group in 2016.

Donald Trump wasn’t so lucky, having been permanently suspended this weekend from Twitter “due to the risk of further incitement of violence”.

More news titles will move towards digital subscription models in 2021, predicts a new study by the Reuters Institute for the Study of Journalism which also expects a comeback for face-to-face reporting this year. Three-quarters of journalists interviewed said the pandemic had accelerated their plans for digital transition, and 51% agreed subscription and other reader-revenue models will eventually work for most news publishers. E-commerce and events were the next most important priorities, with revenue diversification set to be a key theme. While uncertainty has boosted audiences for journalism almost everywhere, those publishers that continue to depend on print revenues or digital advertising face a difficult year – with further consolidation, cost cutting, and closures.

A total of 73% said they were confident about their company’s prospects for the year ahead, although only 53% said they were confident about the future of journalism – with respondents highlighting concerns including the financial sustainability of smaller and local publications. The researchers also speculated on what else “might surprise us” in 2021: “We can expect a thirst for face-to-face contact after a year of lockdowns and restrictions to movement. Real-life events are set to make a comeback this year as Zoom fatigue kicks in. Journalists will get out of the office more, freed by technology to deliver more face-to-face reporting, becoming more embedded in their communities.”

The latest addition to Britain’s array of 24-hour news channels is to begin recruiting more than 100 journalists after completing a £60m fundraising round that it claims was significantly oversubscribed. GB News, which aims to launch later this year, announced on Wednesday that Sir Paul Marshall, a prominent hedge fund manager, and Legatum, a Dubai-based investment group, would become major shareholders in the company.

The announcement of its founding investors paves the way for GB News to introduce what it says will be “a boldly different 24-hour television and digital news service”. It will be chaired by Andrew Neil, the veteran former BBC broadcaster, who will also host a prime-time programme on the channel. The new channel says it will recruit 140 staff – including 120 journalists – and expects to reach 96% of British television households through Freeview, Sky, Virgin Media, YouView and Freesat. 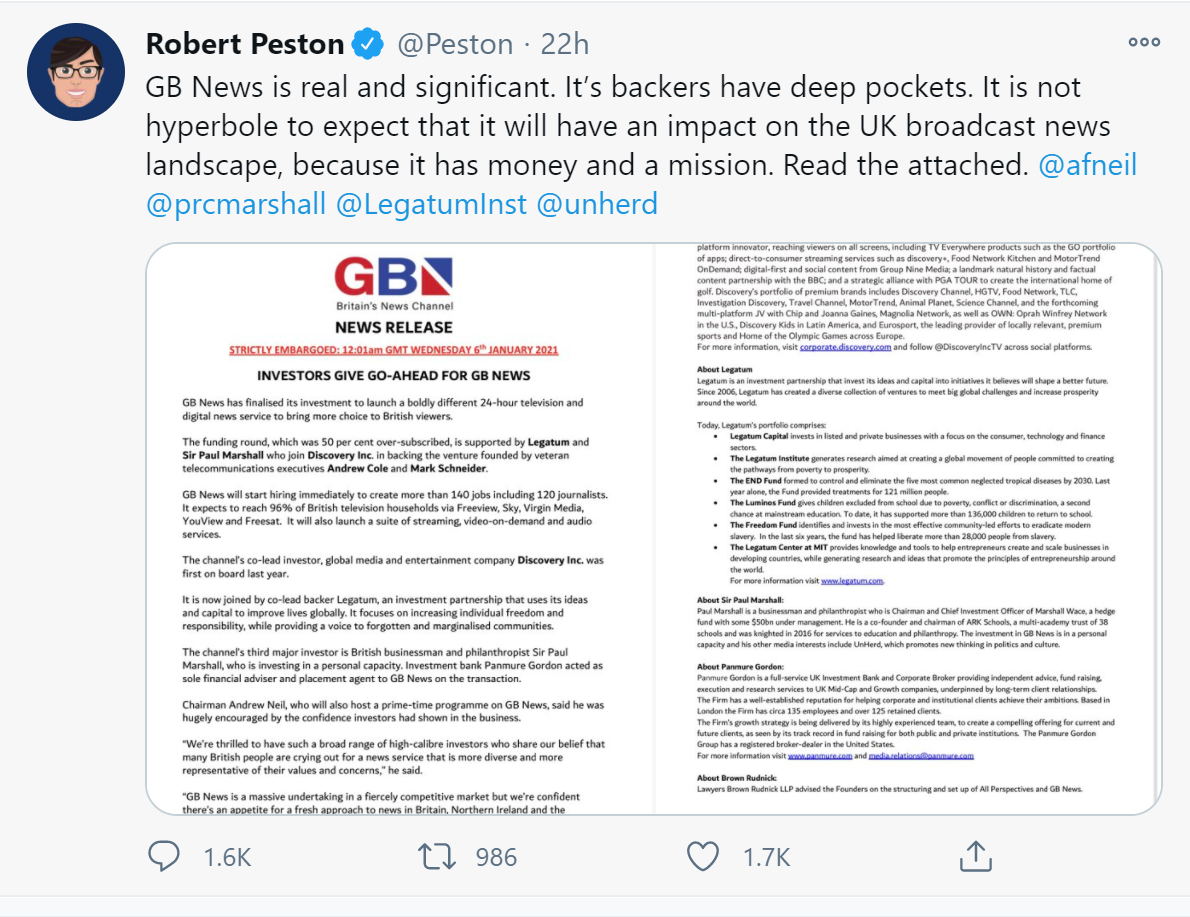 David Churchill has been appointed as a Transport Correspondent at the Daily Mail.

Dominic Casciani is now Home & Legal Correspondent at the BBC.

Angus Berwick is now an Investigative Reporter for Reuters based in the UK.

Abigail Buchanan is now a Digital Lifestyle Writer at The Telegraph.