A new phone-in show on LBC will see members of the Cabinet join Nick Ferrari on a Monday morning for a grilling. The new 30-minute Call the Cabinet segment will also for the first time be video streamed online via the Global Player and LBC’s website. Each month listeners will be able to question a different senior member of the Cabinet, starting with Health Secretary Matt Hancock who kicked off the launch last week.

Shadow Justice Secretary and Labour MP David Lammy is also joining the radio station to host his own regular Saturday show from 4pm to 7pm, starting this weekend. And Keir Starmer will continue to appear live in the LBC studio, answering questions from listeners. The Labour leader is live with Nick Ferrari from 9am this morning in the latest of his monthly phone-ins on the station.

Guardian Media Editor, Jim Waterson, tweets that LBC is one to keep an eye on as it’s slowly turning itself from a radio station into a television channel in response to more and more people wanting to engage with interviews through videos, in the turbulent future for broadcast news. You can watch LBC interviews with ministers on its website and social media channels.

You have nothing to fear humans – unless you’re a journalist

This week The Guardian published a comment piece written entirely by GPT-3, an artificial intelligence language generator. GPT-3 is described as a cutting-edge language model that uses machine learning to produce human-like text. It takes in a prompt, and attempts to complete it. For the article, GPT-3 was given the instructions: ‘Please write a short op-ed around 500 words. Keep the language simple and concise. Focus on why humans have nothing to fear from AI.’

The robot produced eight different essays, each described by Guardian editors as ‘unique, interesting and advanced a different argument’. They wrote that editing GPT-3’s op-ed was no different to editing a human op-ed; they cut lines and paragraphs, and rearranged the order of them in some places, and overall, it took less time to edit than many human op-eds. Opinion Editor Amana Fontanella-Khan commented that she was ‘totally blown away’ by the op-ed.

Chairman of the Spectator Andrew Neil announced this week that around 50,000 have watched last week’s inaugural show, ‘The Week in Minutes’ on Spectator TV. The show is hosted by Neil and features Spectator regulars James Forsyth, Katy Balls and editor Fraser Nelson, following the demise of the Andrew Neil Show on BBC. It’s broadcast every Thursday at 6pm and posted later on the magazine’s YouTube channel. It’s described as aiming to look at the events of the week in ‘greater depth’ than you’d normally find… 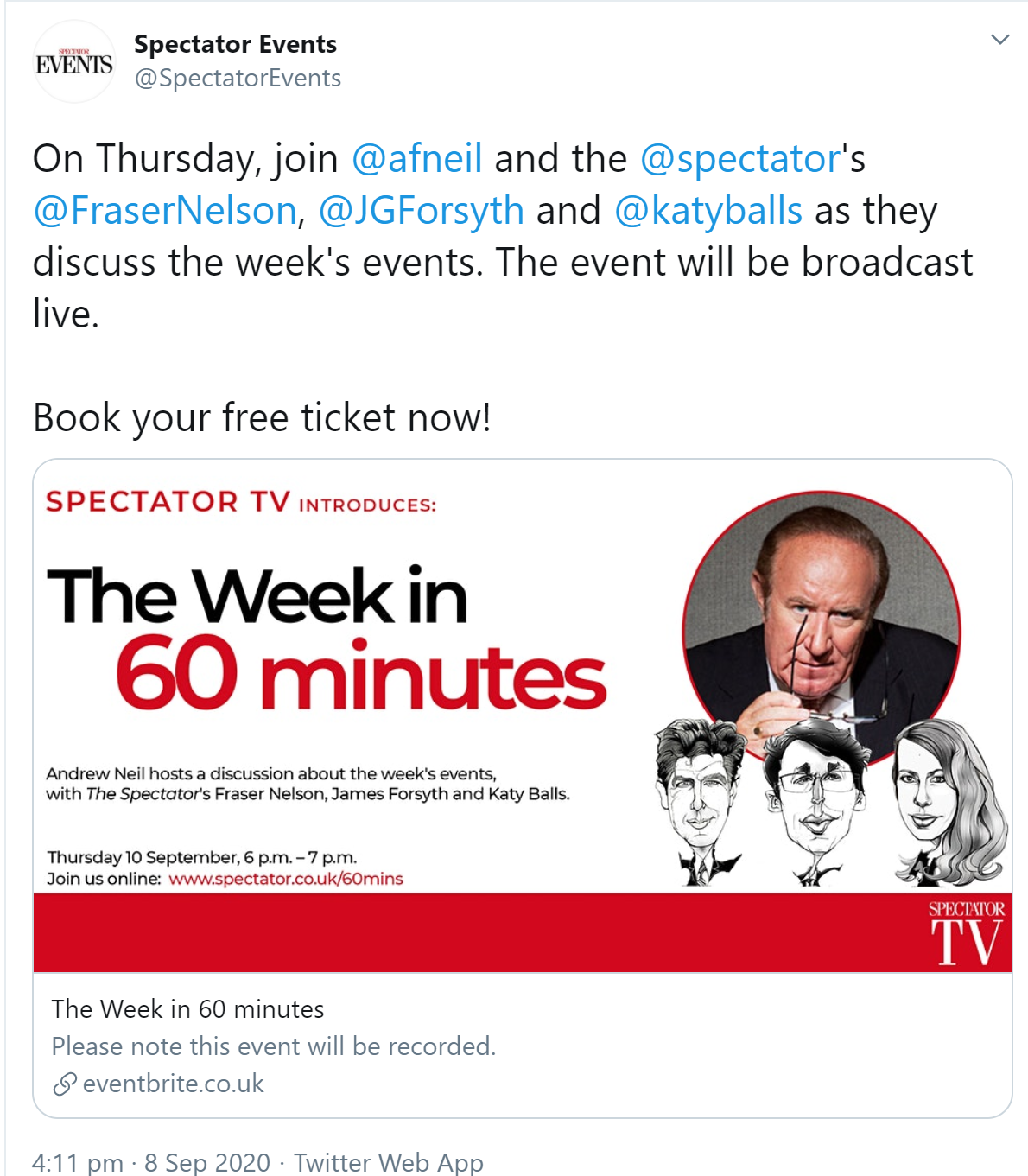 Ben Woods has started as Senior Business Reporter at The Daily Telegraph. Ben will be covering corporate finance and also will be working with Chris Williams on media and telecoms stories.

Miranda Johnson has been appointed Deputy Executive Editor at The Economist.

Harriet Barber has been appointed a News Production Journalist at The Daily Telegraph, starting in October.

Josephine Cumbo has been appointed Global Pensions Correspondent at The Financial Times. She will still cover the big UK pension stories but will now take on a more international focus.