Radio reaches Beyond the Bubble

Commercial radio stations reach 36 million listeners – more than 2.5 million more than the total number of listeners on all BBC radio services, according to the Commercial Radio: Beyond the Bubble report published last week. In particular, the research found that commercial radio is reaching the group of 12 million ‘outsiders’, who are less politically engaged and often overlooked by those in the traditional political bubble, but who have come to rely on bulletins from commercial broadcasters for their news updates. This may be a missed opportunity, according to the report’s authors, as ‘outsiders’ are politically engaged when it comes to polling day – eight out of 10 said they voted at the last general election compared to the average level of voter turnout 67%. The research also found that:

Netflix as a public service broadcaster?

Digital streaming platforms such as Netflix could be brought in to provide public service content alongside traditional broadcasters, according to Ofcom, who this week warned a ‘blizzard of change and innovation’ had left the likes of the BBC and ITV struggling to retain audiences. Ofcom said laws and regulation must be overhauled to protect public service broadcasting, which was at a ‘critical juncture’, while ‘vital’ areas such as news should be safeguarded. The regulator said the rules around public service broadcasting largely date from when the internet was still in its infancy – and they remain focused on traditional broadcasting. Audiences are increasingly turning away from terrestrial channels such as the BBC, ITV, STV, Channel 4, and Channel 5 in favour of global streaming and online services. Last year, only 38% of 16- to 34-year-olds’ viewing habits were made up of traditional broadcast content. That figure rose to 67% among all adults.

News websites – who’s up and who’s down 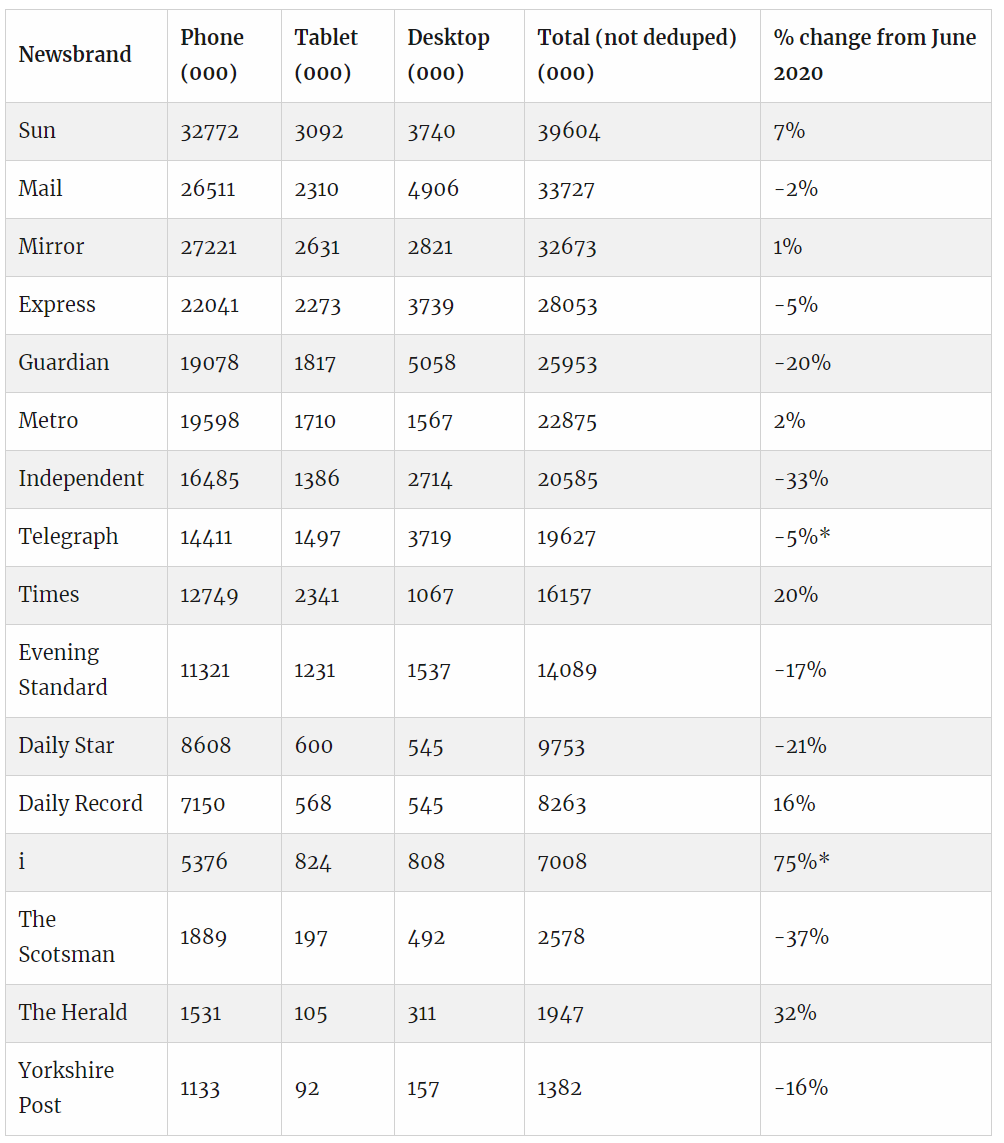 The Sun remains the biggest national newsbrand online with a total of 39.6m readers (excluding duplicates). The biggest growth across the summer (between June and September) was seen by The Herald (up 32%) and The Times (20%). But the Independent lost a third of its readership while the Guardian and Daily Star were each down by a fifth from June.

Elsewhere, Dan McCrum of the Financial Times has been named the British Journalism Awards Journalist of the Year for his investigation into German payments company Wirecard, which exposed a multi-billion-euro fraud. The FT was named News Provider of the Year for a record third time. Scoop of the Year was jointly awarded to the Guardian’s Matthew Weaver and the Daily Mirror’s Pippa Crerar and Jeremy Armstrong for revelations that former top political aide Dominic Cummings broke lockdown rules. 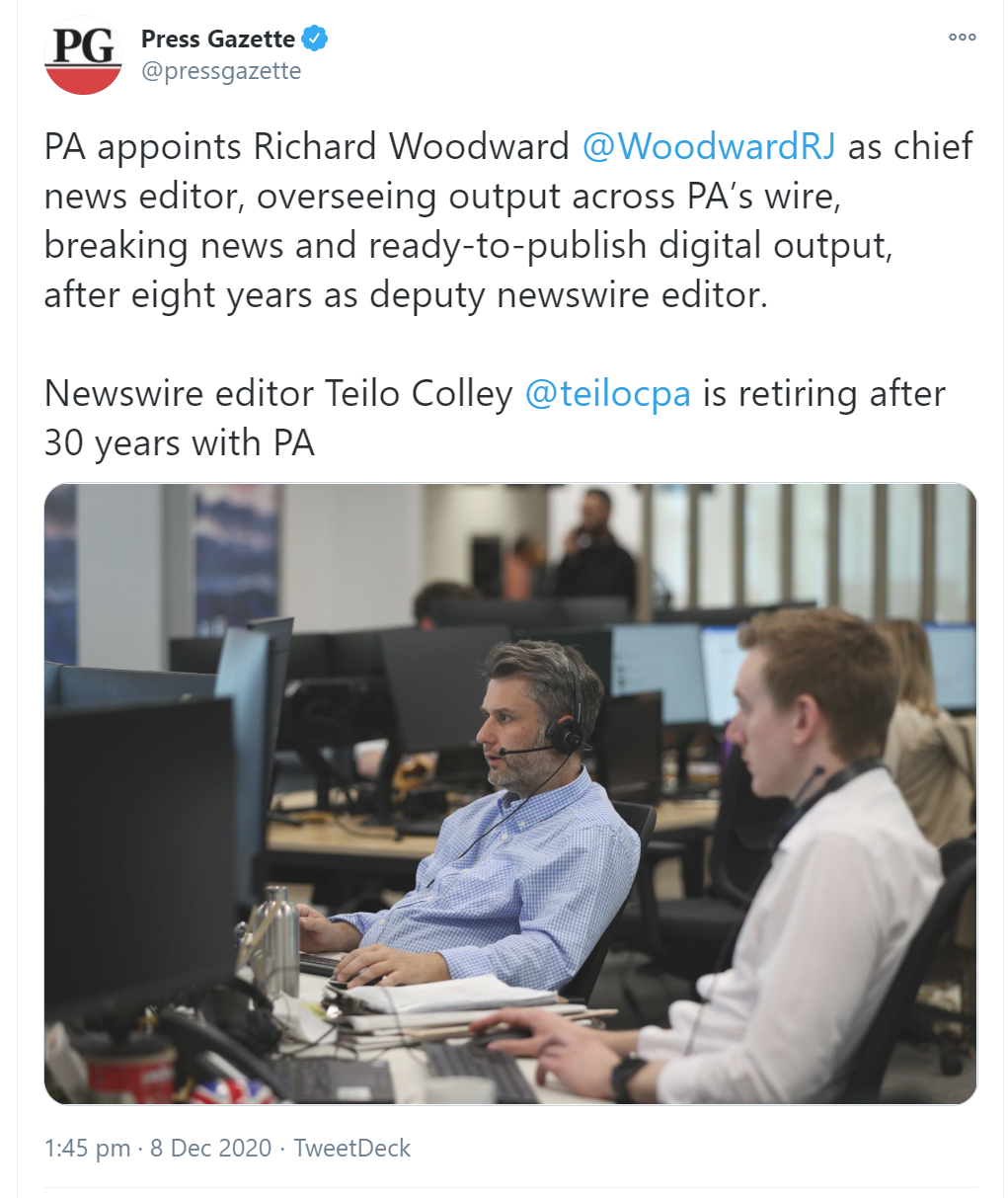 Channel 4 News has launched The Fourcast, a twice-weekly podcast series examining the major stories dominating the news agenda. Channel 4 News’  correspondents, producers and presenters will share their own experiences, people they meet and stories they uncover, as well as their ‘Fourcast’ on what is to come. Each 15-20 minute episode is hosted by digital reporter Kiran Moodley and the series producer is Georgia Graham. The podcast will publish twice weekly until the New Year, when the team intend to increase this to three or four shows per week, before eventually becoming daily. 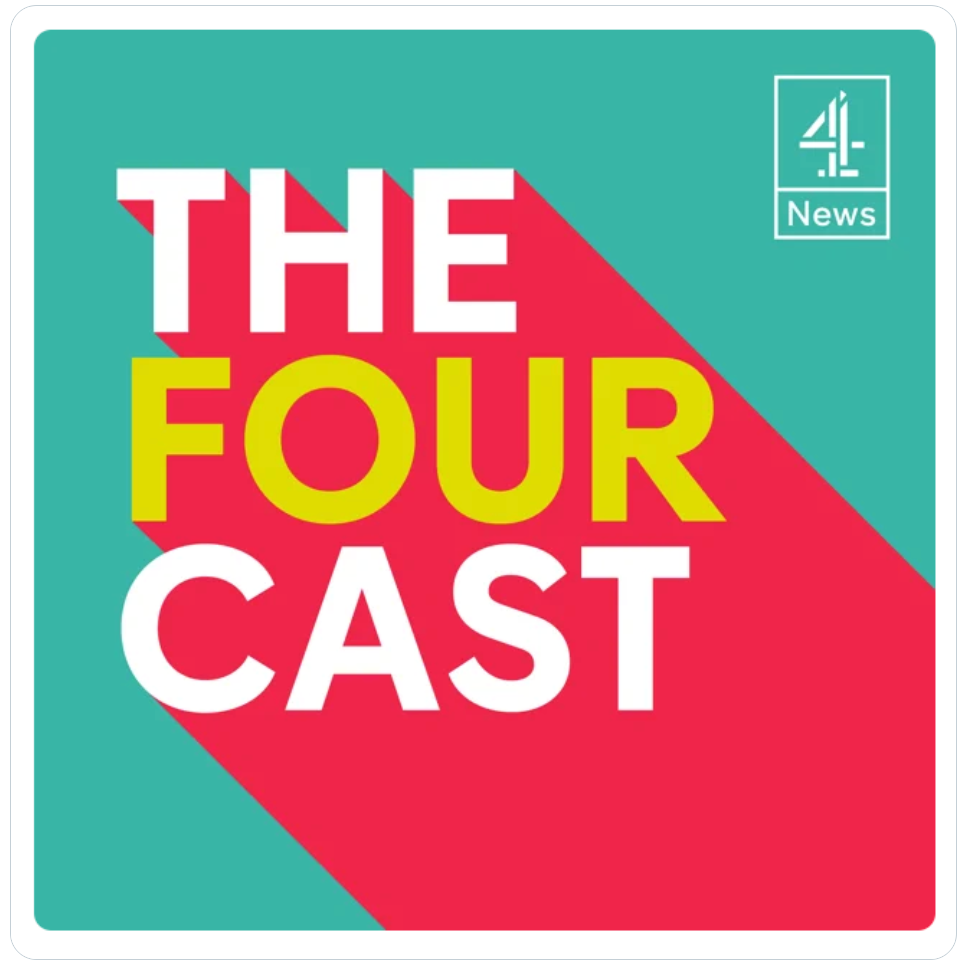 Abigail Beall has been appointed Science & Technology Editor at The Conversation.

Alex Shipman has been appointed as a News Reporter at The Daily Express.