News consumption before COVID: social media and newspapers are down, TV is up

The number of Brits checking the news from social media and Google search has declined in the past year, according to Ofcom’s latest annual news consumption survey conducted before the pandemic. Social media platforms also continued to be rated lower than any of the other main news sources on trust, with just 35% of those who regularly use it for news saying it is trustworthy – down from 38% last year. Facebook was seen as the least trustworthy (32%) and Twitter the most (39%). Google search engine use for news has dropped, with just 39% of respondents saying they did so compared to 51% in 2019. On the other hand, Google News has risen from 13% to 17% in the past year. 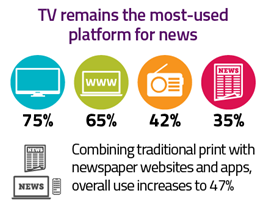 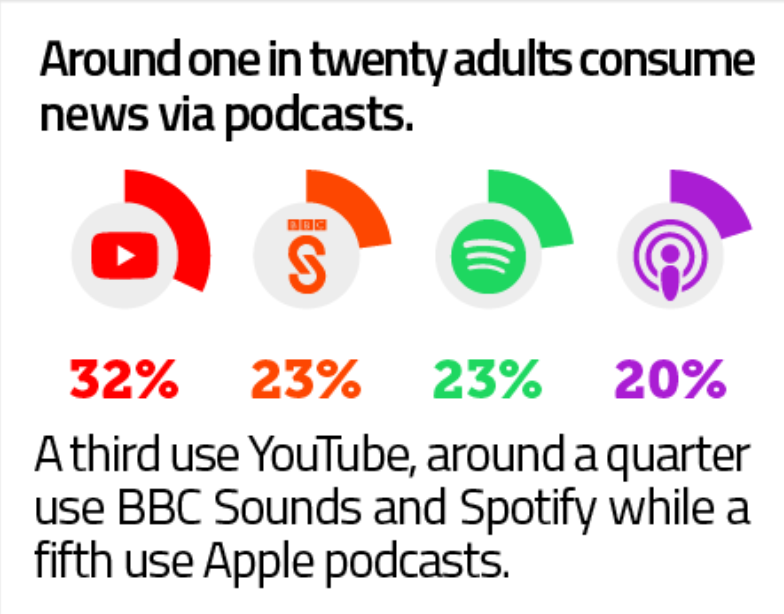 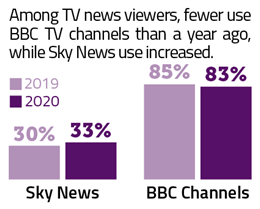 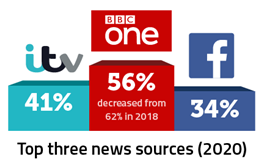 Only a third (35%) of adults are consuming news through print newspapers, with Ofcom analysis of ABC figures showing total national newspaper circulation has plummeted over the past decade from nearly 22m in 2010 to 9.3m in 2019.Meanwhile, just over one in 20 adults (6%) said they consume news via podcasts.

Tech giants ‘too big to fail’

Facebook and Instagram are ‘too big to fail’, according to Oxford University research published on Tuesday looking at the potential ethical and legal considerations in the event of the demise of big tech. The researchers are calling for new regulations to protect users – and society – in the event of a possible collapse. They maintain that whilst the world’s biggest technology companies are unlikely to suddenly go bust, we are nonetheless ‘unprepared’ for what would happen if they did. The research compares Facebook to the big banks during the 2008 financial crash and, instead of asking ‘how can we break it up?’, asks ‘what does regulation look like if we assume it would be catastrophic if the company failed?’.

It is not good news when you consider that the social media platform has this week also admitted it struggled to ban content promoting suicide or exploiting children during lockdown. Facebook reduced its number of content reviewers in March due to the pandemic and began focusing on AI-driven moderation instead. But the company only removed 479,400 pieces of content from Instagram for violating rules on child exploitation and nudity between April and June, down from one million in the previous three months. Content that broke rules about suicide and self-harm was also removed from Instagram 275,000 times over the same period, down from 1.3 million the quarter before.

Online political advertisements could require labels for the first time in a Government crackdown on transparency over political campaigning. New measures revealed this week will mean political parties and campaigners must explicitly show who they are when promoting campaign content online. This means the UK could finally get moderate regulation of online political adverts, including, for the first time, a requirement for ‘organic’ content to carry an imprint declaring who’s behind it. The rules would require a ‘digital imprint’ to be included on formal campaign ads as well as ‘organic’ content made by certain campaigners and candidates on sites such as Twitter, Facebook and YouTube. The move would make digital political adverts slightly more heavily regulated than printed ones, which only require an imprint if they are paid for by a registered participant. Both, however are still less strict than on broadcast media, where they are heavily regulated.

Here’s one Covid figure that the government can’t adjust downward – Private Eye is actually selling as many copies as we were this time last year – an average of 231,073 copies!

Phil Georgiadis has been appointed Transport Correspondent at The Financial Times.

Gabriel Pogrund has been appointed Whitehall Correspondent for The Sunday Times.

Alexander Brown will join The Scotsman in September as a Westminster Correspondent.