MPs have appointed Richard Sharp as the new chairman of the BBC Board following his appearance before the Digital, Culture, Media and Sport Committee last week, where he was grilled over his connections with the Conservative Party. During the committee session, MPs revealed Mr Sharp donated more than £400,000 to the Tories over the past decade, and used to work with Chancellor Rishi Sunak. Nonetheless, the Committee’s report, which was published on Friday found that MPs were impressed by Mr Sharp’s understanding of the BBC, the need to deliver on public service commitments, and to compete globally in a changing media landscape. Initial reservations that for the first time the key roles of Director-General and Chair of the Board would be held by individuals without editorial experience were overcome. The ex-banker told the committee that the BBC’s coverage of Brexit was “incredibly balanced” but that the broadcaster needs to get better at investigating complaints against it.

However, the report found that the process of appointing the Chair had not been an “open and orderly affair” with the names of the Government’s preferred candidates leaked to the media at the outset. There was also a distinct lack of diversity amongst candidates, out of 23 applicants, only two were women and two from a BAME background. Mr Sharp will replace the outgoing Chair, Sir David Clementi, who will stand down from his BBC role in February.

The Daily Telegraph’s joint-owner Sir David Barclay died last week aged 86. The news came the same week as the paper also revealed its pre-tax profits since the Barclay brothers took ownership in 2004 have now reached a total of £452m. That is still £213m less than they paid for it despite Boris Johnson’s praises this week that the brothers had “rescued a great newspaper”. In 2019, the newspaper group made £6.2m in pre-tax profit, up 600% from 2018 but still the third lowest profit level since the businessmen took ownership from Conrad Black.

The Barclay brothers had “operated as one” throughout their business career, while steadfastly avoiding personal publicity and media scrutiny, according to the paper’s obituary. Sir David’s death is rumoured to have opened the door to a sale of The Telegraph newspapers, city insiders believe, as potential buyers could be exploring bids knowing that Sir David was more enthusiastic about the newspaper business than his brother.

The local news sector is reportedly collaborating to create an online planning notice portal for local authorities across the country. The Google News Initiative is providing £1m in funding for the project, which will build a common portal featuring planning notices placed in local and regional print newspapers by local authorities. The portal will be added to about 800 local news websites around the UK, accessible through their homepages as well as running as a standalone site.

The Government has recently proposed removing the requirement for local authorities to print statutory notices in local newspapers in a shift to more online spaces. The obligation on councils to place statutory notices in local newspapers is worth an estimated £10m to the local news industry each year. The report suggests 400 jobs could be put at risk without the income from these notices, at a time when sales and advertising revenues have been devastated by the COVID-19 pandemic. It is hoped the portal will help safeguard the planning notice revenue stream but it will only include notices advertised in print, and publishers are continuing to make the case to the Government that the statutory requirement must stay.

Anita Rani has been appointed Presenter of Woman’s Hour on BBC Radio 4. She will be presenting the Friday and Saturday editions, as Emma Barnett continues to present the show Monday to Thursday. 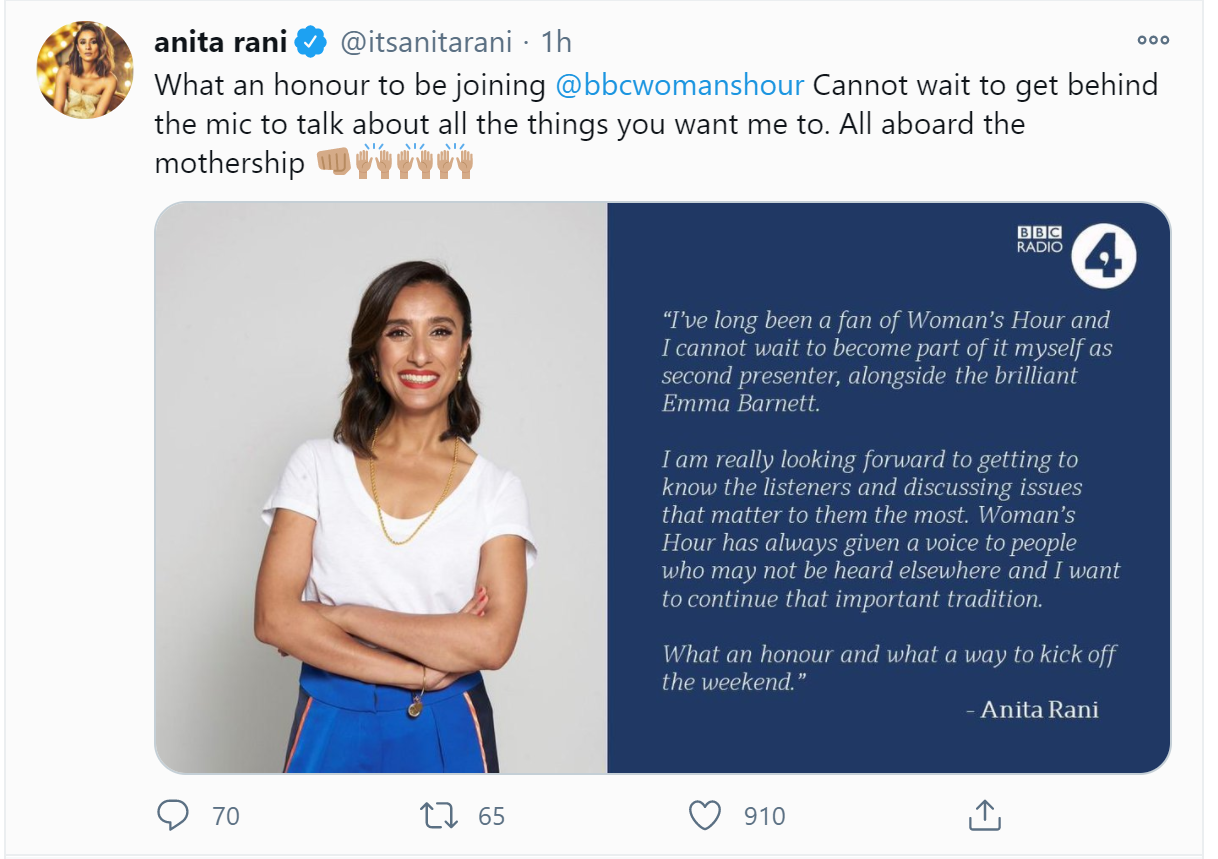 Victoria Richards has been appointed as Senior Commissioning Editor for The Independent’s ‘Voices’ desk.

Natasha Clark has been appointed Political Correspondent at newly merged newspaper and online team The Sun.

Ben Riley-Smith, who is returning to London at the end of January 2021, has been appointed as Political Editor at The Daily Telegraph.

Eleanor Jones has been appointed as the Executive Editor of the IndyBest section of the Independent.

Sarah Davidson joins the i as Money Editor. Sarah was previously at This is Money and is covering all aspects of personal finance.

The Sunday Times has appointed Liam Kelly as arts and entertainment correspondent.