The Daily Mail’s circulation has topped one million for the first time since COVID-19 hit the country in March. The latest ABC figures show that most of the UK’s national newspapers saw marginal sales growth in September but continued year-on-year decline of between 10% and 20% as the effects of the pandemic continued to be felt by publishers. The Financial Times once again recorded the biggest month-on-month growth (10%) but the largest year-on-year decline (-38%).

ABC figures do not currently include The Sun, The Times or The Telegraph, although The Telegraph revealed last month that it had doubled its new subscriber figures from August.

Meanwhile, regional publisher JPI Media has revealed its first financial statement since buying Johnston Press’ assets (including The Scotsman and The Yorkshire Post) from administration in 2018, as the business is up for sale once again. The publisher made a loss before tax of £47.7m, despite having recently sold off its only national title, the i paper, to Mail publisher DMGT and is currently searching for a buyer for the rest of its assets.

News UK’s Chief Technology Officer Christina Scott, who oversees The Times and The Sun, has  this week spoken about how the company is incorporating emerging technologies like artificial intelligence, virtual reality and synthetic media into newsrooms. She said: “There are a lot of things that we have been doing around AI, both in terms of output and helping the newsrooms with production, as well as marketing and advertising. I definitely agree with VR and AR, I think that VR, particularly, is one of those things that we can see growing.” She explained that synthetic media is helping automatically generated audio content sound less robotic all without having to have a live person hosting interviews on videos.

This comes the same week as Financial Times editor Roula Khalaf warned that long-term remote working could be “problematic” for newsrooms as journalists “have to be able to share ideas”, she added that many “underestimate what we lose” from not being there.

Meanwhile, BBC Research and Development has published a white paper, Object-Based Media – An Overview Of The User Experience, which explores the idea that users could make choices about the flow of narrative they are consuming on the media. The research explains that a TV show could, for example, at certain points along the way, give viewers control to focus on segments of the show, or to skip over the detail and opt for the briefer version if they aren’t interested. Audiences will be increasingly in control of what they watch, with the possibility to link up their personalised narrative with other viewers.

Ofcom is asking for evidence on BBC Sounds, the broadcaster’s flagship media and audio streaming service that includes live radio, audio-on-demand, and podcasts.

The audio and radio sector is undergoing a “period of rapid change”, driven in part by streaming services including Spotify and Apple Music. Audience expectations are also changing; with consumers increasingly preferring to listen to content on-demand or online.

The BBC has responded to these market changes by incrementally evolving and expanding BBC Sounds. Given this, Ofcom wants to “take stock” of the market position of BBC Sounds and assess whether there are any competition issues that need to be addressed, via regulatory action or other means.

Ofcom is asking BBC competitors, from the commercial radio sector or elsewhere, to provide views and information on the impact of BBC Sounds on the wider audio and radio market.

Jamie Nimmo starts as Associate Business Editor at The Sunday Times. He will be covering tech, media, telecoms and energy and natural resources. He was previously City Reporter at The Mail on Sunday.

Naga Munchetty will be joining BBC Radio 5 Live in January to present the 10am-1pm slot between Monday and Wednesday, replacing Emma Barnett. She will continue her role presenting BBC Breakfast on BBC One from Thursday to Saturday.

Francis Elliott will be leaving his role as Political Editor at The Times to join research centre, Engage Britain in February 2021 as Director of Advocacy.

Emma Agyemang has been promoted to Global Tax Correspondent at The Financial Times, and is now covering both UK and international corporate and personal tax issues. 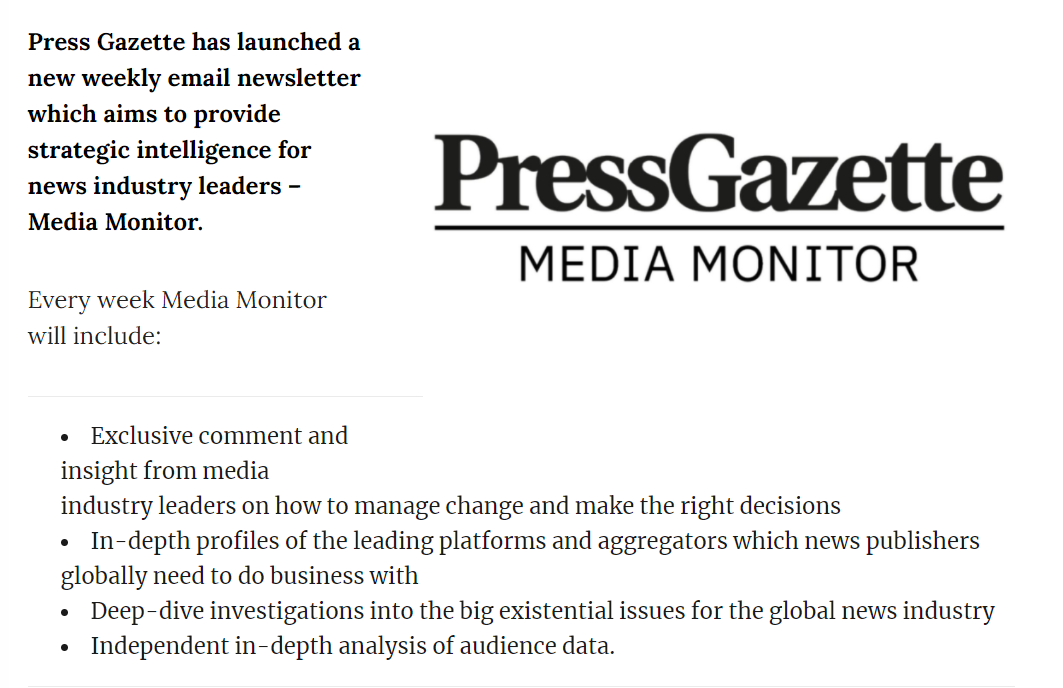