In a rare piece of good news for the sector, research suggests the UK’s newspaper and magazine industry stands to be at least £50m-a-year better off after the Government cut VAT for digital publications in May.

News UK looks set to be the sector’s biggest winner, reaping a potential £15m a year from the decision. The full list of estimates of likely annual benefits of the VAT change includes:

The cut was introduced on 1 May – having previously been scheduled to come into effect on 1 December – to help publishers cope with the coronavirus pandemic. The Government announced the move alongside a pledge to spend £35m in advertising to support the print media during the COVID-19 crisis. The industry has long argued that digital news, liked printed newspapers, should be zero-rated for VAT.

The Society of Editors has written to Number 10 to raise concerns that the Government ‘appears to be deciding when it wishes to engage with a free media’.

Many, including Professor Marc Owen Jones an Assistant Professor in Middle East Studies and Digital Humanities at Hamad bin Khalifa University, Doha, have been reporting an increase in cyber-harassment towards British journalists. 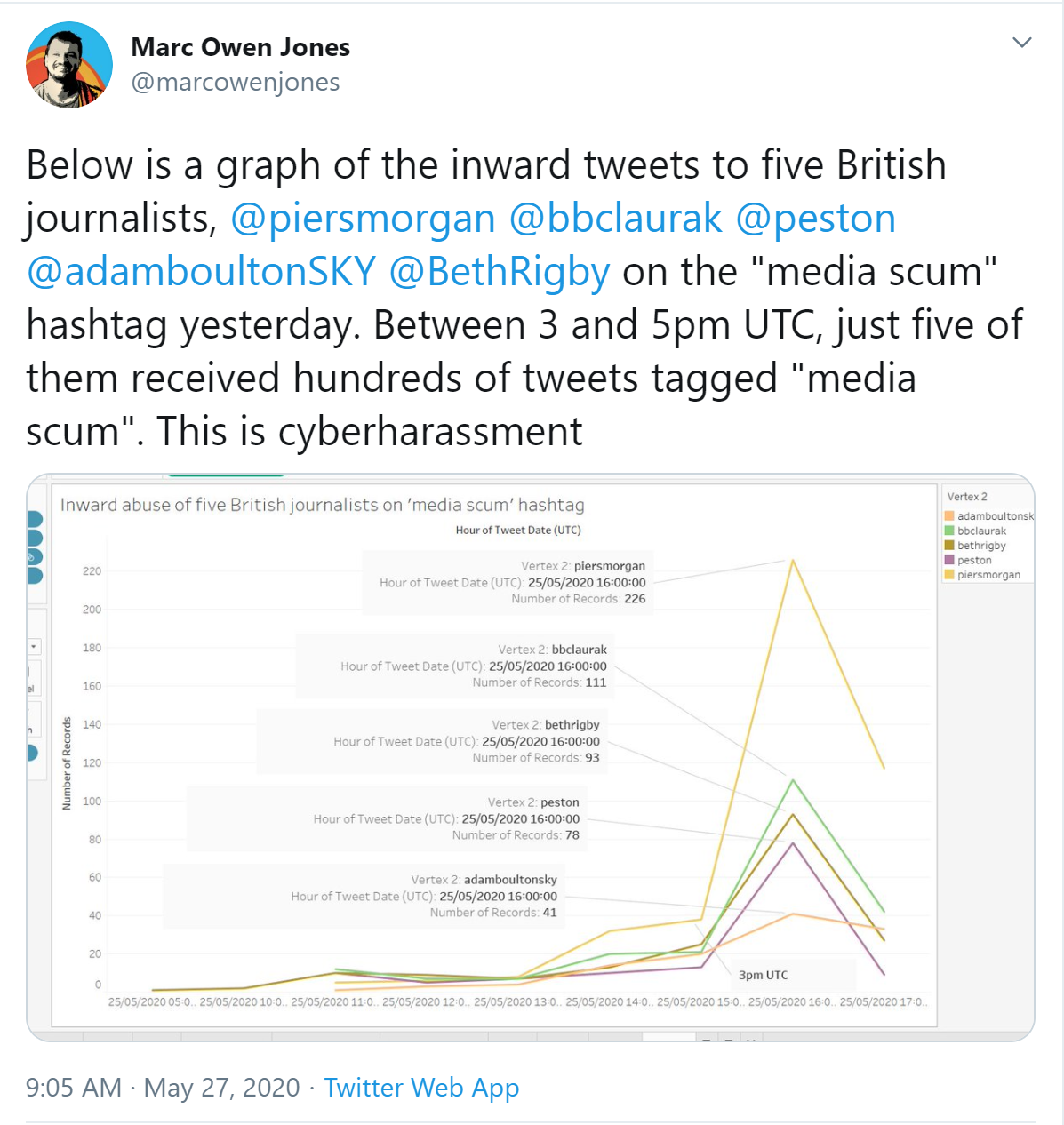 This week reporters and editors from the i paper explain how they have continued to publish a newspaper and website under lockdown. Three-quarters of the paper’s staff have been working remotely and political correspondents have juggled home-schooling with challenging the Prime Minister during Downing Street’s virtual press conferences.

City A.M. is also predicted to be back in print from September 7. Bosses stopped running a physical copy in late March after demand fell amid the pandemic, helping the free-sheet get through the past weeks with no redundancies. The paper will be put together remotely at first, and furloughed staff are expected to begin returning over the summer. Comment and Features Editor Rachel Cunliffe tweeted this morning that she has returned from furlough and is welcoming pitches.

UK national newspapers will no longer publish their monthly print circulations through the Audit Bureau of Circulations (ABC). While April’s figures suggest that COVID-19 has had a considerable impact on sales, the cancellation of monthly statistical releases means that the exact impact of the pandemic may never be truly quantifiable. ABC said this change in reporting will help negate the ‘negative narrative of circulation decline’.

Construction, development and property firms are facing significant challenges due to the Covid-19 outbreak and the environment has changed dramatically. As we gradually move back towards business as usual, clear communication will be key. But how has coronavirus changed the media and political landscape for construction companies – and what will this mean for the future?

Join us for a panel discussion and Q&A at 11am on Thursday 4th June to consider how the industry can effectively communicate with the media, Government and customers at this critical time. 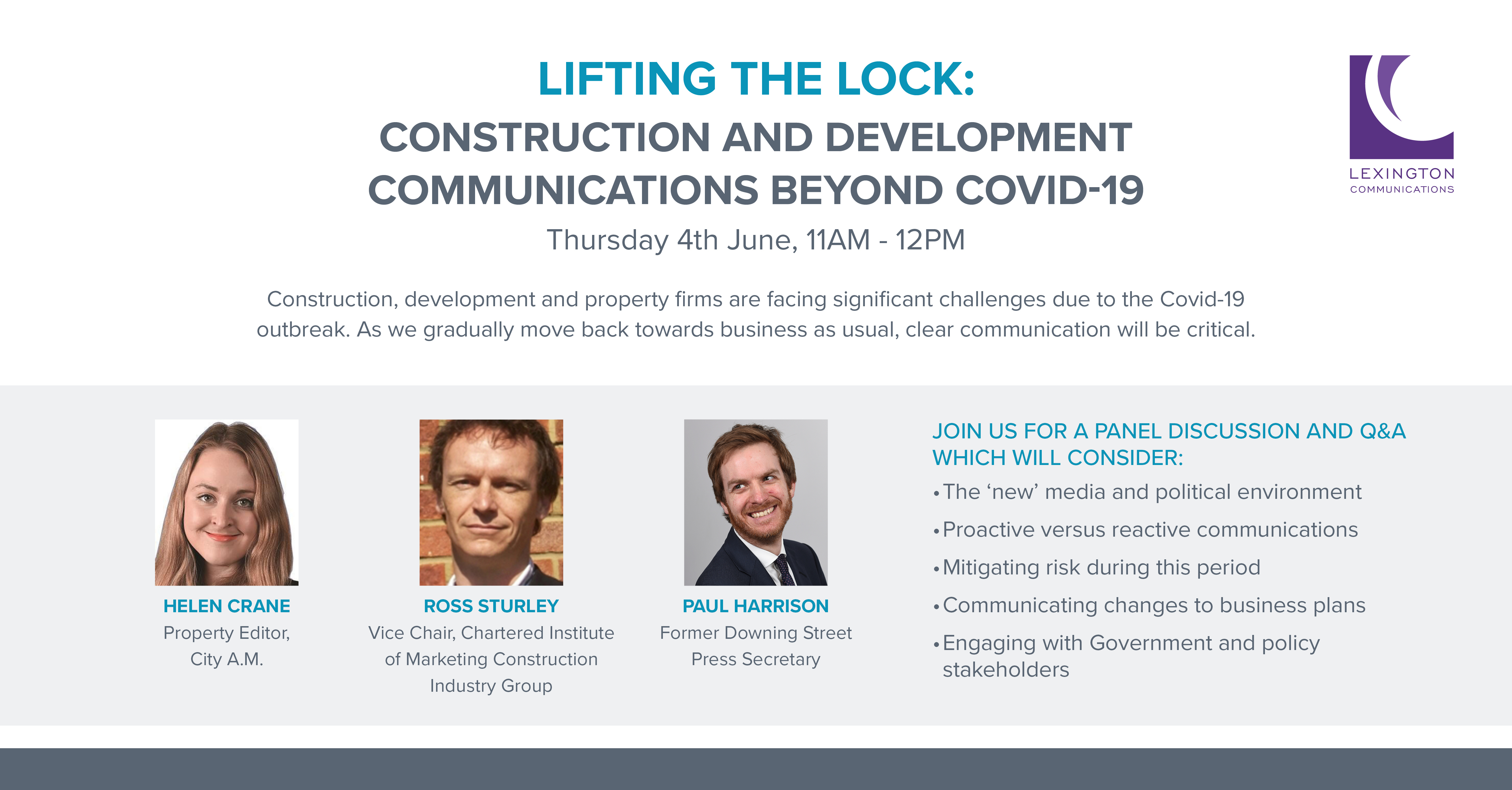 Channel 4 is launching its first content studio to compete against LadBible and VICE, aiming to become the first UK broadcaster to offer a series of social-first branded entertainment opportunities to advertisers.

Emma Barrow has been appointed Head of News & Entertainment at ITV’S This Morning programme.

Rod Ardehali has been promoted to Briefings Editor at Mail+, at the Daily Mail.

Toby Green has been appointed Saturday News Editor at The Times.

David Sirota is now writing a monthly column for The Guardian. He will continue as Editor-in-Chief of Jacobin.

Kate Forrester has started as a Senior Reporter at PoliticsHome.

BBC bosses reprimanded the BBC2 programme’s lead presenter over a monologue in which she attacked the government’s handling of Dominic Cummings’ lockdown trip to Durham, and supposedly breached the coorporation’s impartiality rules.

In the monologue Maitlis told viewers: ‘Dominic Cummings broke the rules – the country can see that and it’s shocked the Government cannot.

For the BBC to come out, in such terms, so quickly is really something, no circling of the wagons – issuing what is effectively a written warning. https://t.co/mEDUQqYsul