News bulletins could be axed

The BBC’s News at Six and News at Ten bulletins could become obsolete as more people get their current affairs fixes on phones and iPlayer, the BBC’s head of news has said. Within a decade, news will likely be in ‘the digital space’ and the BBC’s output will be consumed via iPlayer, according to Fran Unsworth. Asked to predict how TV news would change over the next five or 10 years, she replied: ‘I think TV journalism will still be around because of the power of pictures to tell a story, but it won’t necessarily be received in quite the forms it currently is. So I still think, ultimately in 10 years’ time, we probably won’t be consuming linear bulletins exactly.’ Viewing figures for the 6pm and 10pm shows have soared during the Covid-19 pandemic and ex-host Angela Rippon said dropping them would cause ‘information anarchy’.

Elsewhere, ITV has said the death of the television news bulletin has been greatly exaggerated, shooting down the BBC’s suggestion that they could disappear within a decade. The rival broadcaster has reassured its audiences that its news bulletins are going nowhere.

YouGov has released data showing the impact of COVID-19 on the digital, media and technology arenas. The following graph compares specific platform usage before the lockdown with usage in the middle of lockdown, noting the spikes for Zoom and Houseparty in particular:

Existing subscriptions in April and July largely stayed the same, although Pay TV declined by around 5%. However, almost one million said they were interested in getting Pay TV in the next three months, with Sky having the largest potential share, showing that even though restrictions might be easing, our TV viewing is certainly not diminishing anytime soon. 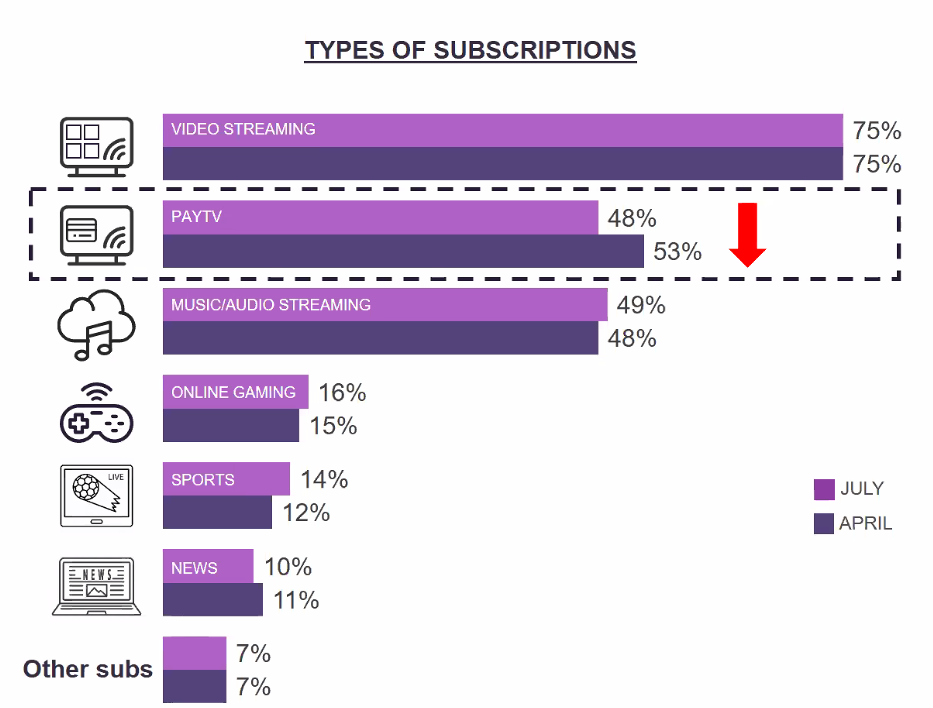 As restrictions eased, social media usage declined between April and July on all platforms – with the exception of TikTok as shown in the below graph:

In April, news consumption increased as did film, drama and documentaries. However consumption of news on television decreased from 54% in April to 41% in July, as did fitness and wellbeing (from 7% to 4%). On subscription TV services, all brands except Netflix saw increases in usage in July, Disney+ added the most, whilst Britbox (a subscription service of BBC and ITV boxsets) doubled its share (though from a low base): 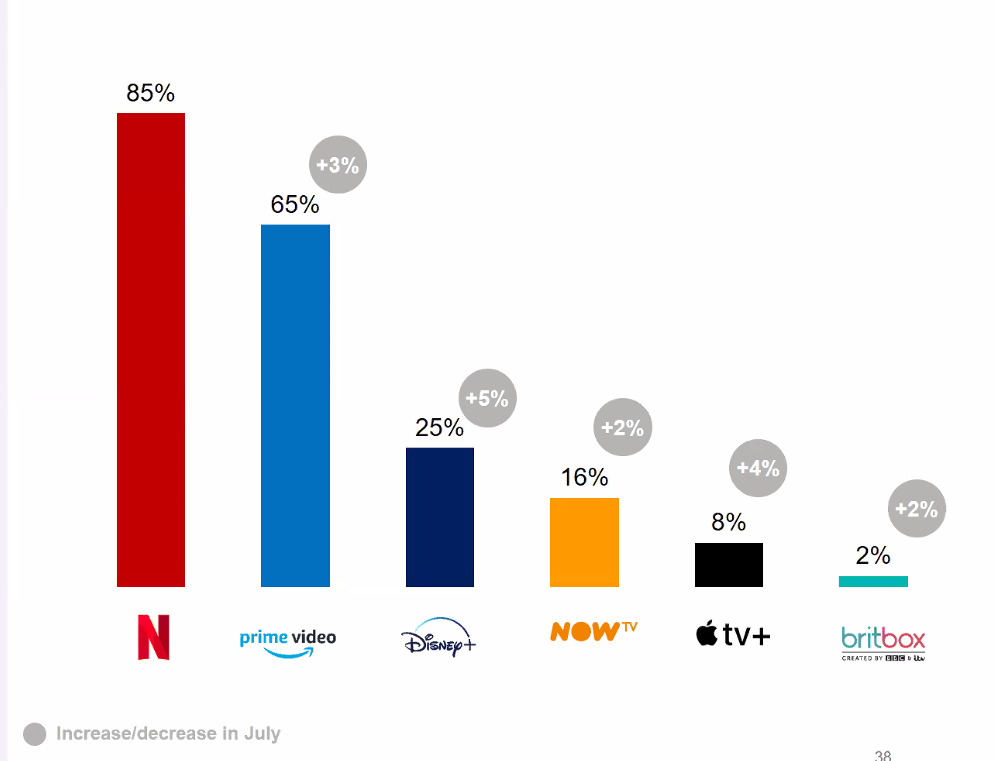 Who owns the news?

Lord Rothermere and Rupert Murdoch control more than two-thirds of the UK’s print newspaper market, according to Press Gazette data. Lord Rothermere’s DMGT, which owns the Daily Mail, Metro and i, is the largest national newspaper group in terms of revenue, daily circulation and combined monthly reach (print readership plus online traffic). DMGT claims a 46% share of the UK national daily print market (ABC figures for each title combined) followed by Murdoch’s News UK, which owns the Sun and The Times. But when it comes to the Sunday print market, News UK takes the lead. 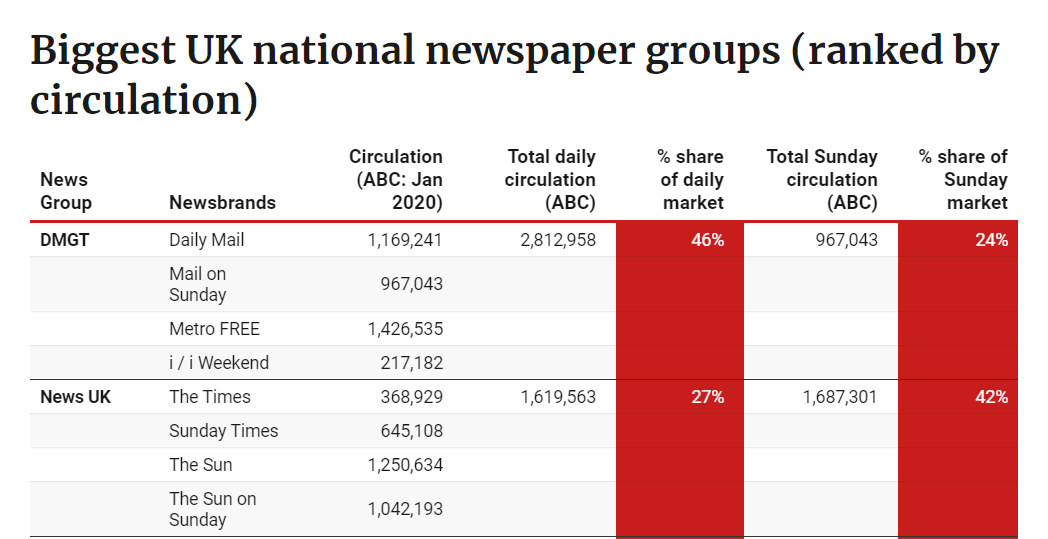 The Daily Mail overtook The Sun to become the UK’s best-selling daily newspaper in May, a title that had been held by the red-top for more than 40 years under Murdoch’s ownership. There are six major newspaper publishers in the UK in total, who between them own all 20 paid-for daily and Sunday national print titles. Reach owns the most national newspapers with seven titles, after the Mirror group bought the Express and Star in 2018. Between them, Reach, DMGT and News UK own 90% of the UK national daily and Sunday print market.

Ben Gartside has been promoted at The Daily Telegraph. He now covers Construction, Real Estate and Outsourcing for The Telegraph’s Business desk.

Philip Collins will be leaving his role as Political Columnist at The Times.

Beth Ashton has been appointed Head of Audience at The Independent. Beth is due to join the title later this month from Telegraph.co.uk, and will be replacing Ibrahim Salha in the role. Beth will be responsible for overseeing audience growth at both The Independent and the Indy100.

Anna Van Praagh has been appointed Chief Content Officer at the Evening Standard.

Kuba Shand-Baptiste has been appointed Acting Deputy Editor for the Voices section at The Independent.

Georgia Chambers is joining the i paper as Audience Editor, taking the lead on newsletter strategy.