Former Labour leader Jeremy Corbyn MP has vowed to campaign against the launch of the new News UK television channel, as he campaigns for a more “just, free and accountable” media as part of his Peace and Justice Project. The project will not be signing up members but Corbyn hopes to play a convening role in bringing together activists, trade unions and other leftwing groups to debate the role the media plays in society.

Ofcom gave the go-ahead last month to the new channel, backed by Rupert Murdoch, which is expected to be on air for four to five hours a night. It competes with Andrew Neil’s GB News, with the pair racing to be the first on air. Corbyn repeatedly criticised the role of the media in public life during his time as leader of the opposition. In 2018, Corbyn gave a lecture at the Edinburgh Television Festival calling for a taxpayer-owned British Digital Corporation to offset the power of multinational corporations in the media, though the policy never made it into Labour’s manifesto.

The New Statesman has also published an article this week arguing that the “Foxification” of the British media must be resisted, and that the two new TV news channels will “further damage a deeply fractured Britain”.

The top media news story down under this week is that Google is threatening to remove its search engine from Australia after the country attempted to make the tech giant share royalties with news publishers. Whilst Google already has agreements in other countries to fund local news, the proposed Australia law goes further and is the first in the world to introduce a law to make Google, Facebook and others pay media outlets for their news content. But the US tech firms have fought back, warning the law would make them withdraw some of their services. Australian PM Scott Morrison said lawmakers would not yield to “threats”.

This is the latest development in the case of mounting pressure for tech giants to pay for news content across the world, as Google struck a landmark deal with media outlets in France on Thursday. In Australia, the proposed news code would tie Google and Facebook to mediated negotiations with publishers over the value of news content, if no agreement could be reached first. Whilst Australia is far from Google’s largest market, the proposed news code could pave the way for how governments worldwide could seek to regulate big tech firm in the future.

Culture Secretary Oliver Dowden MP writes in the Times’ Red Box this week about Twitter’s suspension of Trump’s account, and how the UK Government plans to protect free speech while regulating social media. 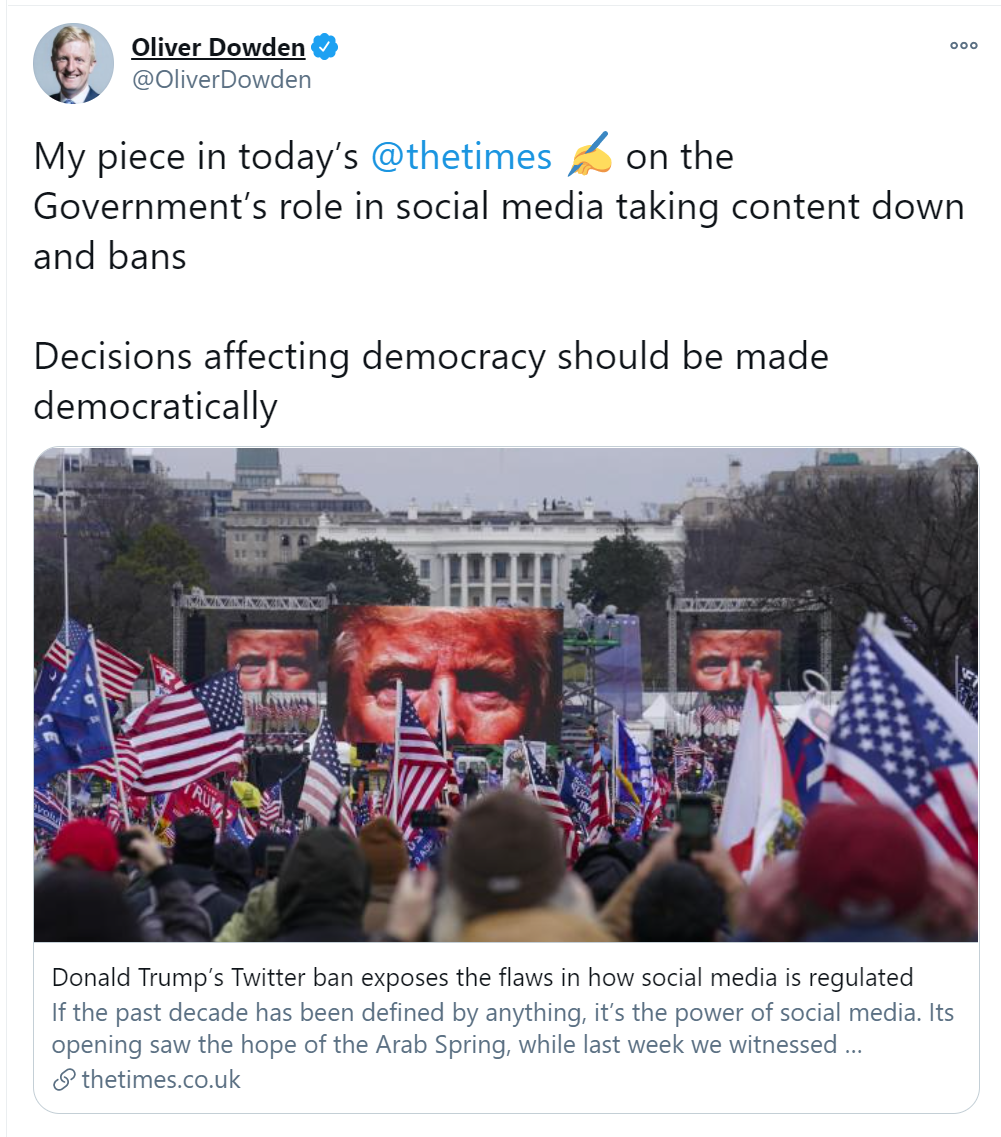 Ben Spencer has left the Daily Mail to be the next Science Editor at The Sunday Times.

Shaun Wooller has left The Sun and is moving to the Daily Mail, where he will continue to cover all aspects of health news, including policy and medical research.

Kate McGough has been appointed Education and Identity Producer for the BBC.

Kadhim Shubbar has recently returned to London to join the FT’s investigative unit as a Corporate Reporter.

Jess Clark has been promoted to Retail and Property Editor at City A.M., she continues as the Book Editor at the newspaper.

Jonathan Coles has been appointed as a Reporter at The Daily Mirror.

The New Scientist has appointed Anna Demming as Features Editor for Physics and Technology.