The pandemic has changed daily life almost beyond recognition – our work, travel and social routines have been thrown into chaos. But what of how we consume news? Communications regulator Ofcom has commissioned an ongoing weekly online survey of around 2,000 respondents, to monitor how people are getting news and information about the crisis. Fieldwork takes place each weekend, asking people about their habits and attitudes of the previous seven days. The key findings below summarise responses gathered between 27th March and 12th April:

This comes the same week as forecasts that news websites that rely on display advertising revenues are facing an ‘unprecedented’ decline in the market. Sections of the digital ad market could fall by as much as a fifth in the first half of 2020, according to ‘severe’ scenario predictions drawn up by analysts. 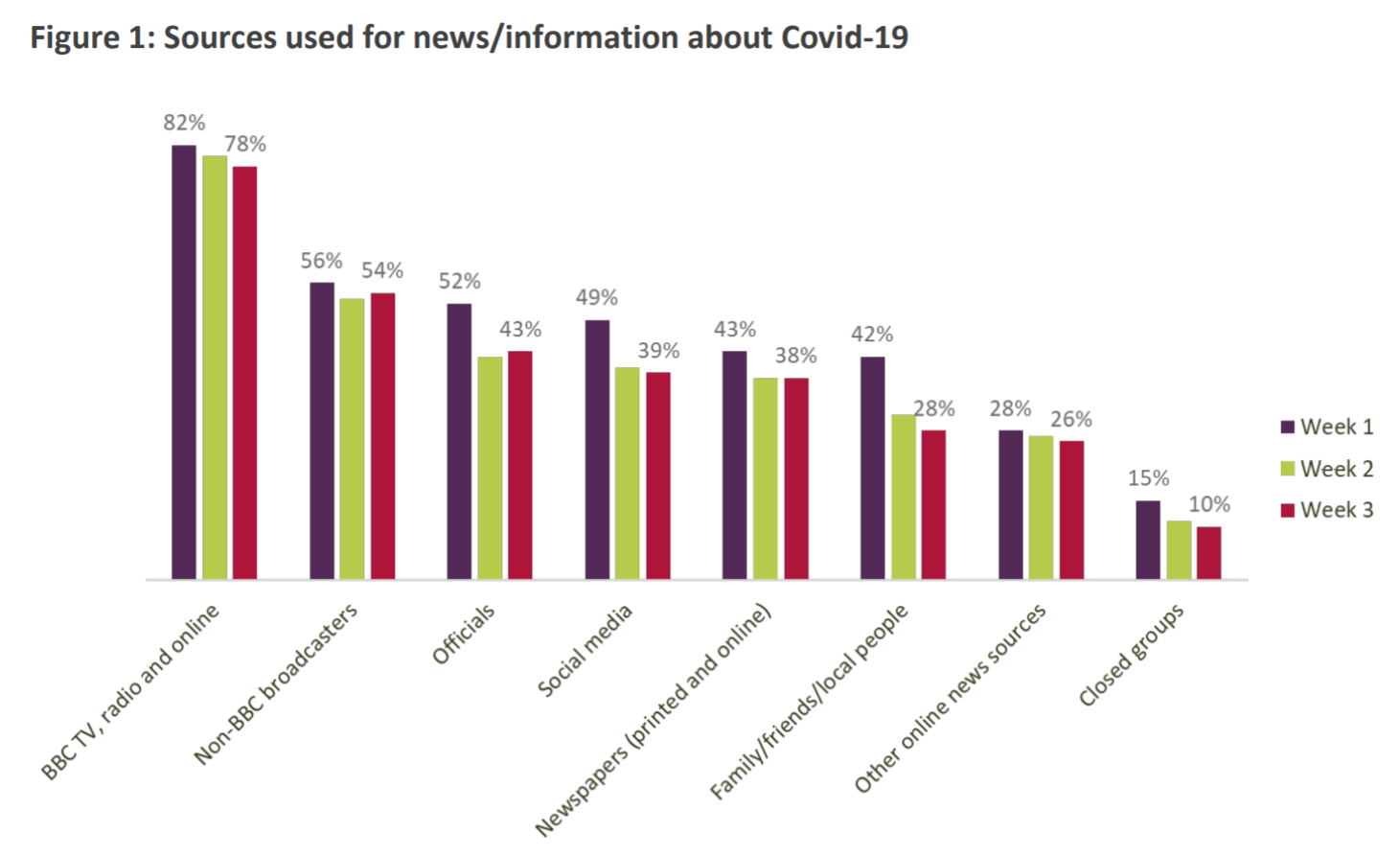 As we acclimatise to lockdown life, it’s also been interesting to track responses over time. Between weeks one and three (27th March to 12th April):

Meanwhile on the small screen, stay-at-home Britain is becoming a nation of streaming pirates, with the Guardian reporting traffic to illegal film and TV sites is surging.

As the nation stays home, households are reportedly watching an average of five hours more TV each week than before lockdown.

In the end of March, visits to film piracy sites were up by 57% compared with a month before. Sites allowing viewers to illegally watch TV shows and series saw a 29% increase across the same period.

In total there were more than 300m visits to sites allowing film and TV content to be downloaded illegally last month, as millions of homebound Britons are hunting for more home entertainment to pass the time.

The Times Red Box editor Matt Chorley has announced he will be stepping back from the programme, describing it as an ‘honour to drop into Red Box readers’ inboxes every morning and share my hastily assembled thoughts on the big and small issues of the day’. Left in the driving seat for Red Box is The Times’ reporter Esther Webber.

Chorley leaves Red Box for Times Radio, which has this morning revealed its line-up of presenters, including BBC broadcaster Aasmah Mir and editor of The Times Literary Supplement Stig Abell who will host the station’s weekday breakfast show to strengthen News UK’s growing newsbrand, ahead of the ad-free speech station’s launch this summer. Whilst Chorley will take charge of the mid-morning slot, Cathy Newman from Channel 4 News will anchor the Friday drivetime slot.

Luke Jones, a recognisable voice from BBC Radio 4’s PM and The World at One, has been poached to co-present Friday-to-Sunday breakfast with Jenny Kleeman, a journalist known for her work on Panorama and Channel 4’s Unreported World.

Seen as a direct rival to BBC Radio 4, Times Radio will provide news, discussion and commentary with a ‘warm, expert’ tone. It is a partnership between The Times, The Sunday Times and Wireless, the audio business purchased by News UK in 2016 that also produces Virgin Radio, TalkSport and TalkRadio.

After four brilliant years I am stepping back from writing Red Box for a new challenge.

I am beyond excited, honoured and terrified that when Times Radio launches I will be hosting the new week-day mid-morning politics show.

The journalist Rachel Johnson (who is also the Prime Minister’s sister) is joining LBC to present her own 6pm Friday evening programme. The producers describe the show as giving listeners centre stage, with the ‘brand-new, hour-long show’ being ‘packed with opinions, debate and the latest news’. While Rachel will be behind the mic, we’re told LBC’s audience will be in the driving seat to discuss the big issues of the day that matter to them. 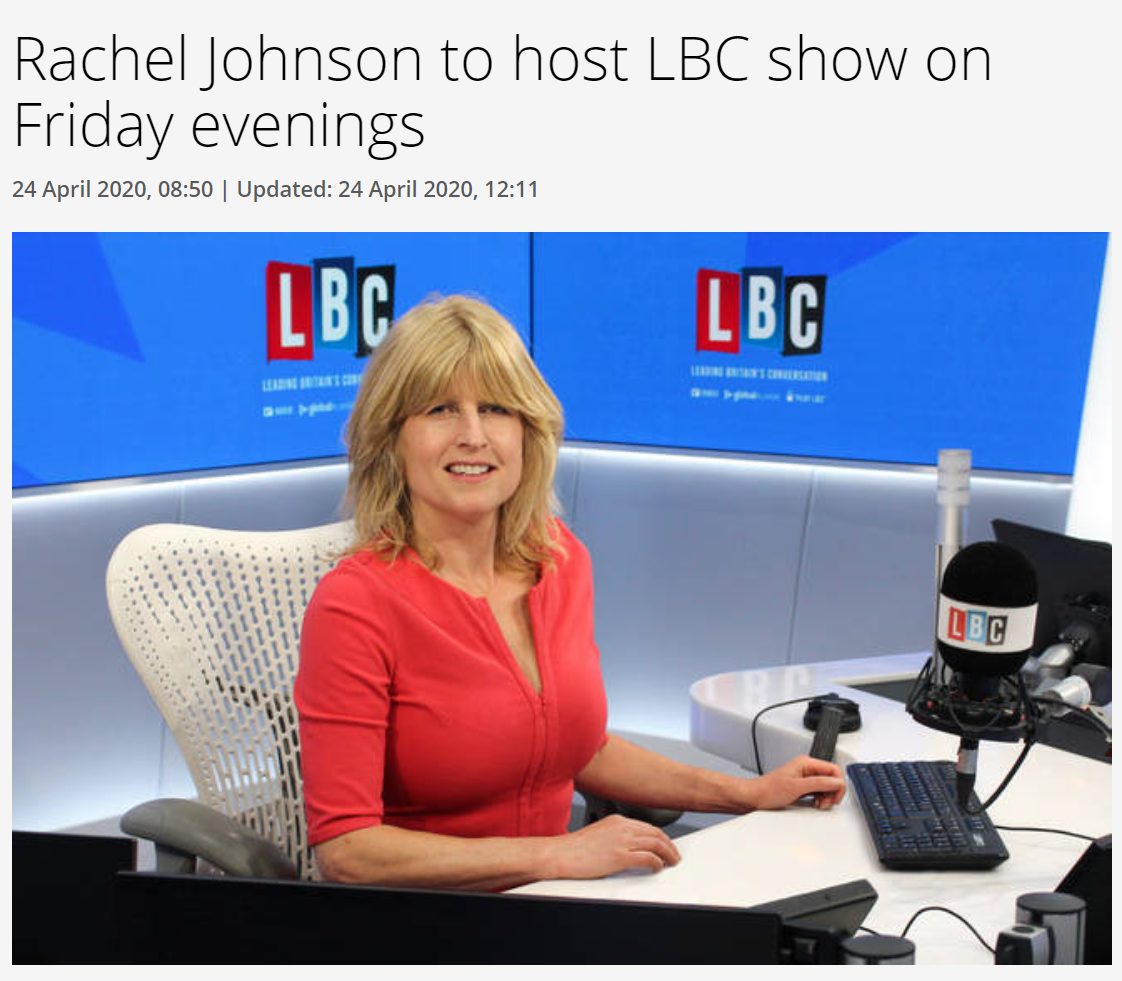 David Parsley has been appointed City Editor on the i Paper. He will focus his time working on both business and economic stories across the paper – including news, features and sport sections.

Chris Newlands has been appointed Business and Money Editor at the i Paper.

Raf Sanchez has now started his new role as a London-based Correspondent at NBC News International.

James LaPorta is an Investigative Reporter at The Associated Press.