Adults are now spending more than a quarter of their waking day online – the most on record – with services such as TikTok and Zoom seeing unprecedented growth, according to Ofcom’s latest study into the nation’s online activity. Ofcom’s annual Online Nation report – an in-depth study of how people use the internet – reveals that during the height of lockdown, UK adults spent a daily average of four hours and two minutes online – up from just under three and a half hours in September last year.

The study also reveals how coronavirus is changing the way we communicate. The proportion of UK adults making video calls at least weekly has doubled during lockdown (from 35% to 71%). Zoom (659,000 users in January to 13 million in April) and Houseparty (175,000 versus 4 million) have rapidly grown their user bases. Video-sharing sites and apps are also surging in popularity. TikTok, for example, reached 12.9 million UK adult visitors in April, up from just 5.4 million in January. One third (32%) of  adults now spends more time viewing video-sharing services than traditional TV, and two in five of us now create and upload videos ourselves. 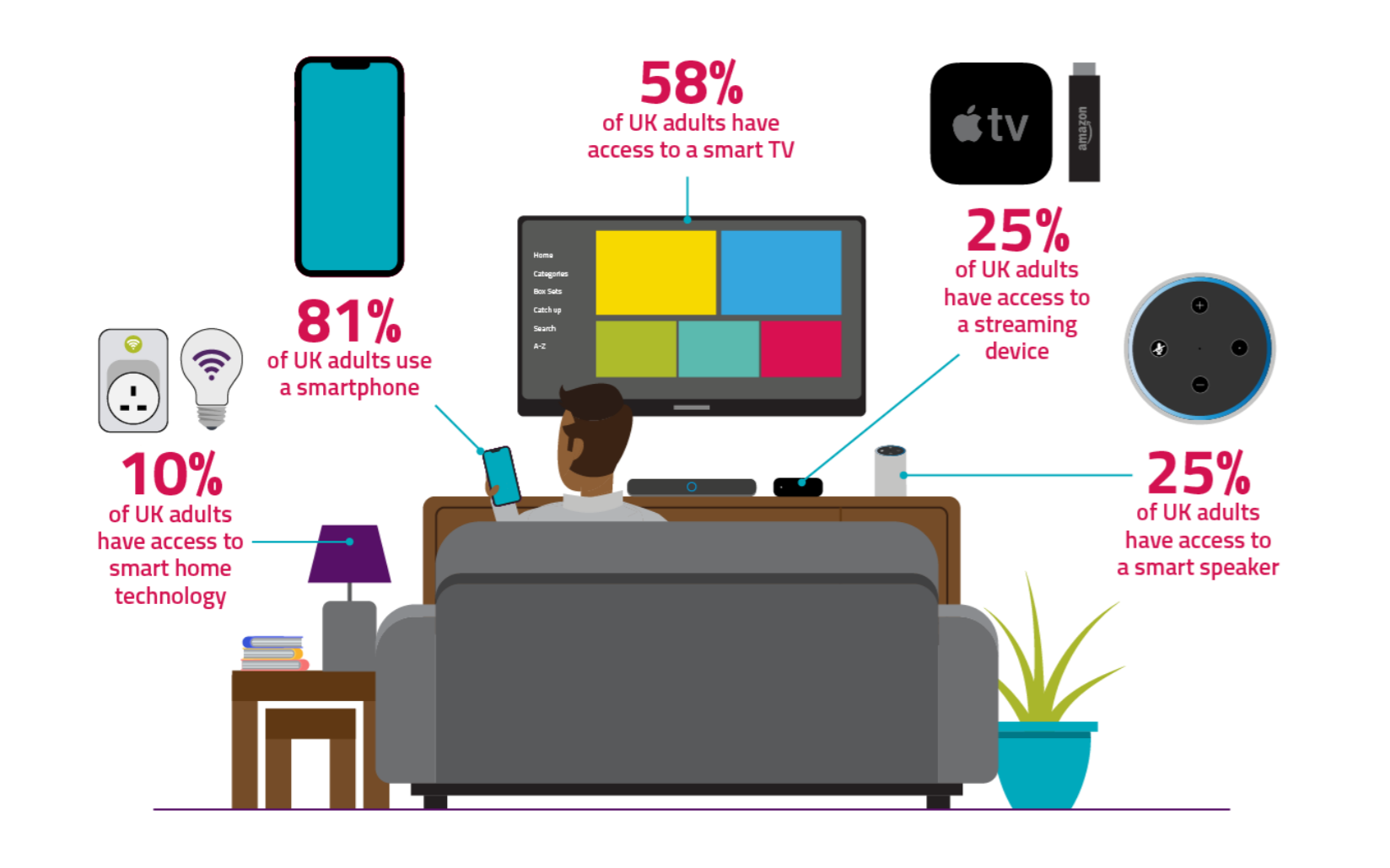 The regulator also found that as online news consumption grows (half of people now get their news through social media platforms), people are less likely to check the facts. 26% of social media users said in autumn last year that they don’t tend to check the information in articles they see in social media. This comes as Ofcom’s new CEO, Melanie Dawes, appeared before the Digital, Culture, Media and Sport Committee on Tuesday to answer questions on the regulator’s efforts in tackling online harms. During the hearing, Dawes said that Ofcom will not hesitate to impose fines on social media firms who fail to deal with harmful content. 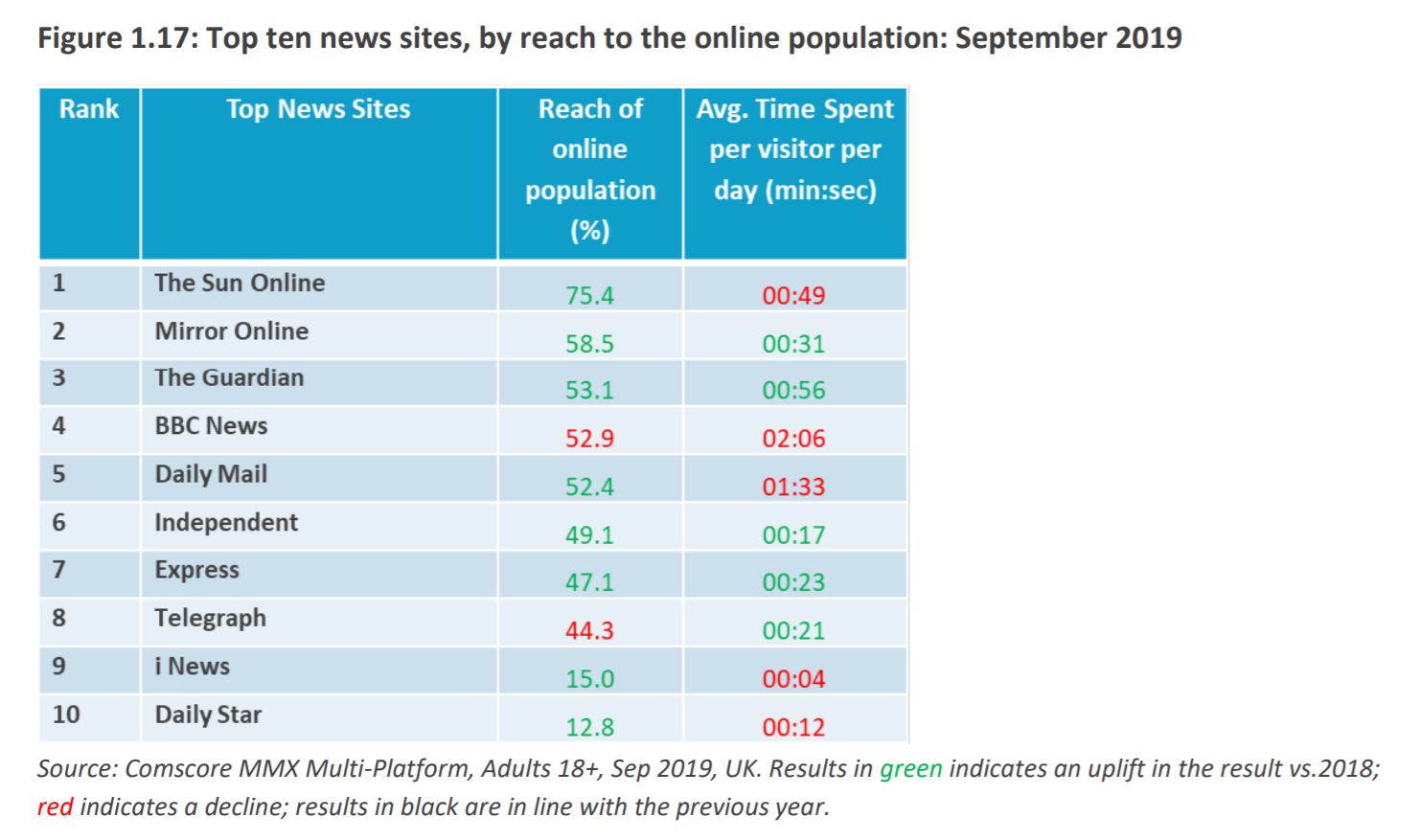 And in print, whilst Ofcom’s stats reveal that the Sun Online has the highest reach online, the Daily Mail has replaced The Sun as the UK’s most-read newspaper after 42 years in the top spot.

Starbucks, Unilever and Coca Cola this week joined the list of brands pulling advertising from social media companies, as pressure builds on platforms to crack down on hate speech. Coca-Cola said it will suspend advertising on social media globally for at least 30 days, and Unilever wrote that it has taken the decision to stop advertising on Facebook, Twitter and Instagram in the US, due to the ‘polarized atmosphere’ placing an increased responsibility on brands to build a trusted and safe digital ecosystem. Starbucks has also announced it will suspend advertising on some social media platforms in response to hate speech. Advertisers are coming under increased pressure to join the growing Facebook advertising boycott that is being orchestrated by the ‘Stop Hate For Profit’ group. The Guardian has described it as Facebook’s ‘largest ever advertiser boycott’.

Google has predicted a 5.3% drop in advertising revenues for the first time since 2008. Facebook, meanwhile, is expected to grow its digital advertising revenues by 4.9% this year, while Amazon – the US digital ad market’s third largest competitor – is forecast to be up 23.5%. Between them, the three tech giants are expected to increase their share of the market from 62.1% to 62.3%.

Google has said it will start paying selected publishers for ‘high-quality content’ for the first time when it launches a new licensing programme later this year. The media and tech giant has already signed up local and national publications in Germany, Australia and Brazil to use the first version of the new product. Google said in a blog that the launch would ‘help participating publishers monetise their content through an enhanced storytelling experience that lets people go deeper into more complex stories, stay informed and be exposed to a world of different issues and interests’.
This comes in the wake of widespread cuts and redundancies across the journalism sector, as the BBC announced this week regional job cuts 60 in Scotland, 60 in Wales and between 30 to 40 in Northern Ireland.

Across the pond, 2,000 US publishers have pushed for the Journalism Preservation Act, having sent a report to regulators alleging that Google has used its online market dominance to ‘strong-arm’ them into unfavourable content agreements.

Alongside Alibhai-Brown, The Times columnist Sathnam Sanghera, Mirror football writer Darren Lewis, Sky News correspondent Ashish Joshi and former BBC sports editor Mihir Bose were among the journalists to sign a letter urging the Society of Editors to accelerate action on the issue.

The journalists said they were raising the issue now because of the recent debate around equality and diversity sparked by the killing of George Floyd in the US last month. Their letter said: ‘A diverse editorial team helps reflect a wider cross section of opinion and cover stories that are not just race-related in an expansive and balanced way, giving the views of BAME communities on a range of matters that have traditionally not been aired; from Brexit to education to the state of the economy, we too are affected by the same issues that impact our fellow Britons.’

Times Radio launched this morning at 6am with a large budget and high-profile presenters inlcuding Aasmah Mir and Stig Abell grilling the Prime Minister on the economic truth of the lockdown, institutional racism in the UK, and how coronavirus has affected his personal health.

The new station, which is heavily staffed by former BBC presenters and producers, is being run without adverts as a promotion for the Times’s digital subscriptions, in the knowledge it will make a hefty loss for the first few years.

There are signs the government is supportive of the challenge to the BBC’s dominance of speech radio. Johnson granted the station his first live broadcast interview in months, having not appeared on Radio 4’s flagship Today programme since last October.

Boris Johnson tells @TimesRadio he lost a lot of weight in intensive care with coronavirus and the UK will be “more resistant to diseases such as Covid if we can tackle obesity”. Listen now 🔊 https://t.co/nTwN679B3O@AasmahMir | @StigAbell pic.twitter.com/Woio9IkzU6

Lexington are hosting a webinar this week with our partners FIPRA International, exploring the Government’s likely approach to digital markets regulation and competition between tech companies.

You can register by clicking here or on the graphic below.

Stig Abell is stepping down as editor of the Times Literary Supplement (TLS) after four years to take up a new role of executive editor at News UK’s radio and podcast division Wireless. Abell will now co-present the breakfast show on Mondays to Thursdays at Times Radio. Abell will be replaced at TLS by Martin Ivens, who stepped down as The Sunday Times editor in January.

Catherine Byaruhanga has been appointed Africa Correspondent at BBC News, covering news across the continent.

Emma Haslett will be joining the New Statesman soon as Head of Audience and Communities. She was previously a Curation Editor at Bloomberg.

Patrick Scott will be joining the New Statesman next week as Data Projects Editor. He is currently a Senior Data Journalist at The Daily Telegraph.

Anna Van Praagh has been appointed interim Head of Features at the Evening Standard across print and digital.

Dipesh Gadher has been appointed Home Affairs Correspondent at The Sunday Times. He was previously Chief Investigative Reporter at the title.

Ed Brown has started at Times Radio as Executive Producer across the drive show, Monday – Friday. He was previously at BBC 2 as a Producer for Newsnight.

Hanna Dokal is now a Social Media Journalist at the Financial Times.

Nicholas Hellen has been appointed Transport Editor at The Sunday Times. He was previously Social Affairs Editor at the title.

Lucy Jones has now started her new role as a Features Writer at the Mail on Sunday. She was previously a Reporter at The Sun.