Readers will remember from a September edition, that women’s voices are being ‘worryingly marginalised’ in reporting of COVID-19 due to a ‘war-like’ framing of the pandemic. A new study by the Global Institute for Women’s Leadership at King’s College London published this week has further added to this, revealing the extent to which female voices and expertise have been marginalised in media reporting of the crisis.

The research analysed almost 147,000 articles on COVID-19 between March and July 2020. In coverage of science, technology, engineering and mathematics (STEM) and economics, two areas particularly relevant to the coronavirus crisis, for every mention of a well-known female STEM expert, 19 male counterparts were mentioned. For every reference to a well-known female economist, five male economists were named. 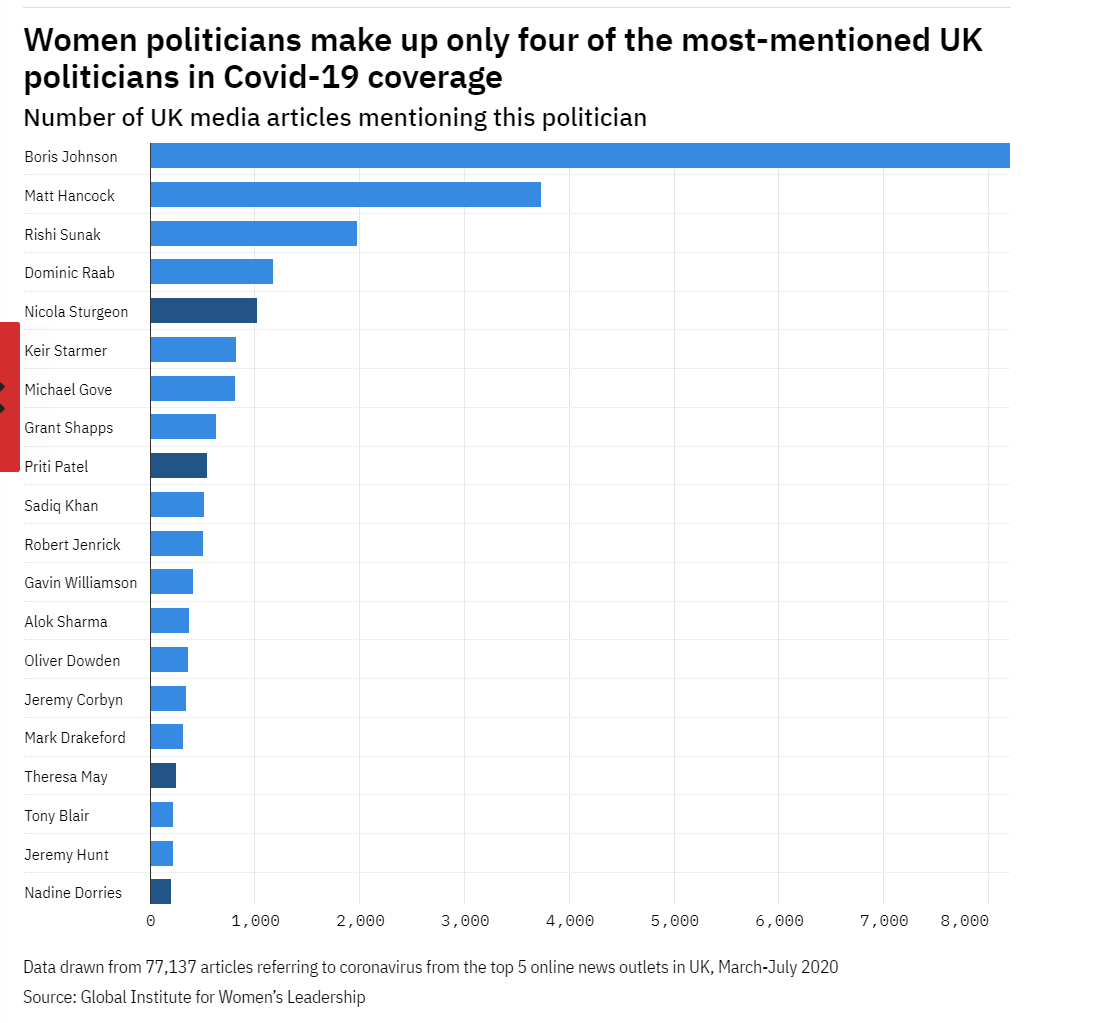 Although voices of both expert and non-expert women were under-represented when compared to the population share in articles about science and business in the context of COVID-19, this marginalisation was more stark when it came to quoting experts. “The more expert and well-known the voices become, the further women’s share in them decreases,” said report author Laura Jones.

When it came to political voices in the press, women were also less prominent. Male politicians were mentioned five times as often as female politicians in media coverage in all of the three countries looked at in the study.

Sky has this week revealed that Sky Arts will be extending its sponsorship of National Theatre Live UK for the next three years. As a result, in a UK TV first, two of the theatre’s hit productions – Jane Eyre and Twelfth Night – will also be screened directly to Sky Arts next month.

This comes after the broadcaster made Sky Arts available to anyone with Freeview to watch in mid-September – previously only available to those who paid for a Sky TV bundle. National Theatre Live usually screens recordings of its sell-out London shows in cinemas across the country. Since its launch in 2009, National Theatre Live has broadcast to 937 UK cinemas reaching an audience of 5.2 million. However, these productions haven’t aired on terrestrial television before.

Sky said the move is part of its ‘renewed mission’ to increase access to and drive participation in the arts at a vital time for the cultural sector, that has been badly hit by the pandemic and caused theatres to close nationwide.

New reporting rules at the Beeb

The BBC’s new social media guidelines have reportedly banned “virtue signalling” – when someone publicly express opinions intended to demonstrate their moral correctness  –  as well as posting any criticism of colleagues. New Director General, Tim Davie, told staff in news and current affairs that they will be held to higher impartiality standards regarding their personal posts than other employees.

Staff have also been warned emojis can “undercut an otherwise impartial post” and that liking or following certain accounts can be enough to count as sharing a personal opinion on an issue. Davie warned that journos must avoid being seen to support any campaigns at all, such as by using hashtags, regardless of “how much their message appears to be accepted or uncontroversial”. He also banned linking to anything they haven’t read in full or breaking news on a personal social media account.

Chuffed to say that as part of the new Swinford era I’ll be returning to Westminster as chief political correspondent in February https://t.co/dDk0QlgdX1

The Mail on Sunday, having suspended production of the celebrity and culture magazine Event in April, has confirmed that the title will not be returning. The paper has already moved some of the features into the main newspaper and Wine Writer Olly Smith has moved to You magazine.

Will Kirkman starts on The Telegraph’s money desk. Will joins from This Is Money and will be covering savings, energy, cars and insurance.

Jenna Macfarlane has been appointed Digital Journalist for JPI Media’s central digital team, she will be working for titles including The Scotsman and Yorkshire Post.

Meredith Turits has been appointed Editor at BBC Worklife – which aims to provide trusted guides to work, life and success for a global audience of ambitious, intellectually curious professionals who are inspired by the pace of global change.

Mark Mardell has left the BBC. He is Presenter of Radio 4’s The World At One on Fridays and The World This Weekend on Sundays. His last show was Sunday 1st November.