MailOnline grew revenues by 3% in the year to September 2020 – despite COVID-19 hammering other parts of Mail, Metro and i publisher DMGT. The Trust reported this week that revenue was down 13% to £604m despite an underlying 1% growth in the first five months of the financial year before the pandemic hit. The biggest fall in revenue was at the Metro, the commuter-targeted title reduced its circulation to a quarter of its previous levels at the start of the first UK lockdown. The Daily Mail, Mail on Sunday, Mail Online and Daily Mail TV together reported revenue of £508m, down 9%. MailOnline however made up 28% of this total and was the only part of the business to actually see growth, presumably as people turned to the internet to consume news from their homes. Advertising revenue across all the Mail businesses also fell by an underlying 9% to £231m, including a 26% decline in print advertising which the company put down to both COVID-19 and the existing structural and competitive challenges in the market.

Web traffic to the most widely read business titles has surged during the pandemic according to the latest Comscore UK website audience data. Business Insider saw its monthly online readership grow from around 7 million unique views per month in the previous quarter to 9.5 million in the first quarter of 2020, driven by a huge spike in readership levels for March as people went online to stay connected during lockdown. Other leading publications including Bloomberg and Forbes saw a similar increase in readers. The data revealed that audiences waned slightly after a significant initial coronavirus bump in traffic, but remain generally higher than before the pandemic. 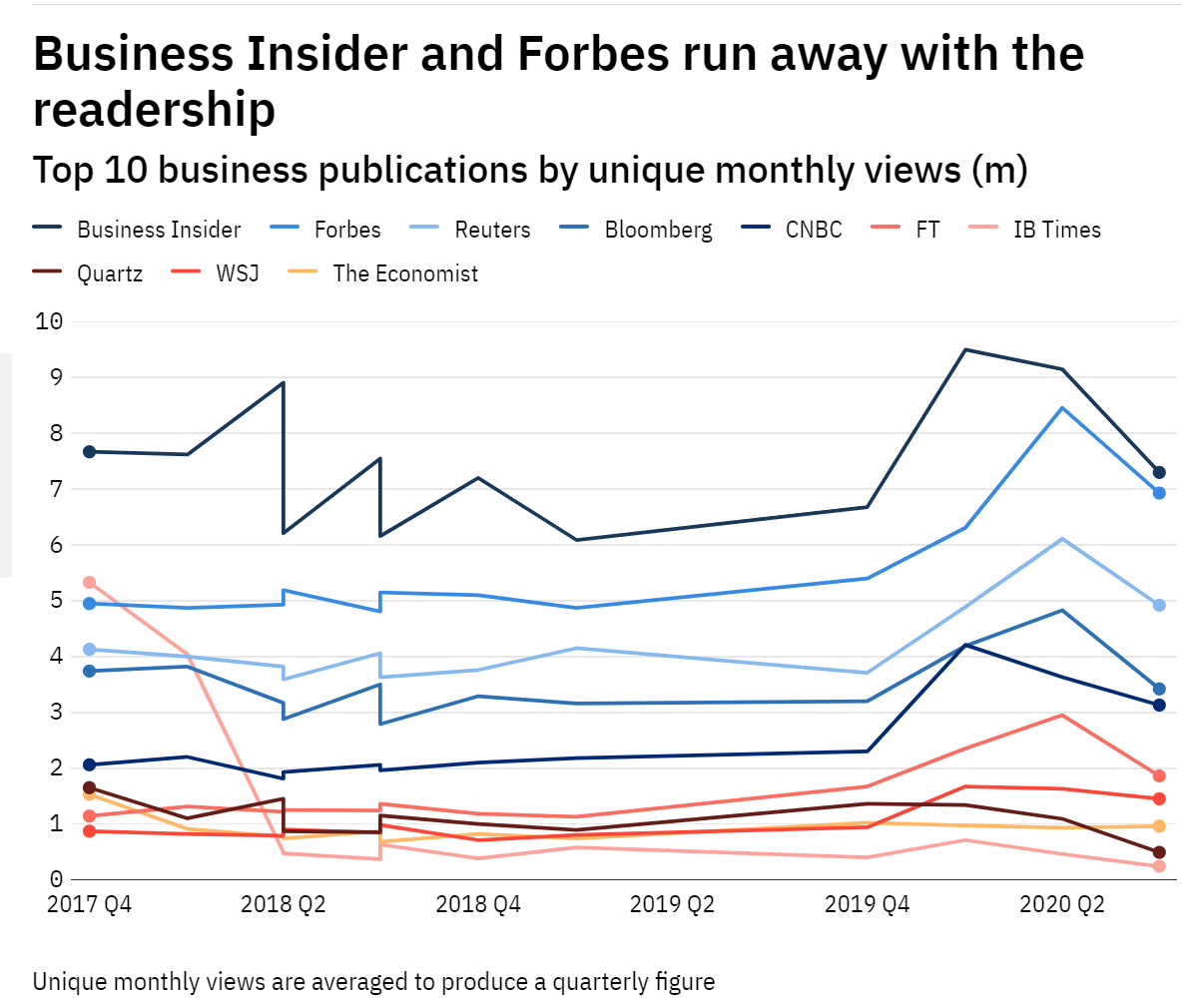 Fox News is back

Fox News has launched an app allowing British viewers to watch the station, three years after it was taken off the air by Sky. The Fox News International app lets audiences stream Rupert Murdoch’s right-leaning news service, initially with a free trial. As the channel is not broadcast on licensed television services in the UK, it will not be subject to Ofcom’s rules on impartiality. Fox News’ presidential election coverage, which won the highest viewing figures across all the US networks, has generated renewed interest in the service across Europe, including in the UK. The channel reportedly infuriated President Trump by calling the state of Arizona for Joe Biden and failing to back his legal attempts to overturn the results of the election.

Ofcom: Women still make up less than half of TV and radio

New figures from Ofcom have revealed women and people from minority ethnic backgrounds are still under represented in the UK’s TV and radio workforce. According to its annual Diversity Report, Ofcom found women make up 48% of the workforce, and people from minority ethnic backgrounds equate for 14%. Both figures have seen a slight increase from 2018/19. The report also found:

Ofcom urged for faster progress in three priority areas – increasing the proportion of underrepresented groups in the industry; senior accountability for setting and delivering against diversity objectives; and better information and representation around social class and geography. 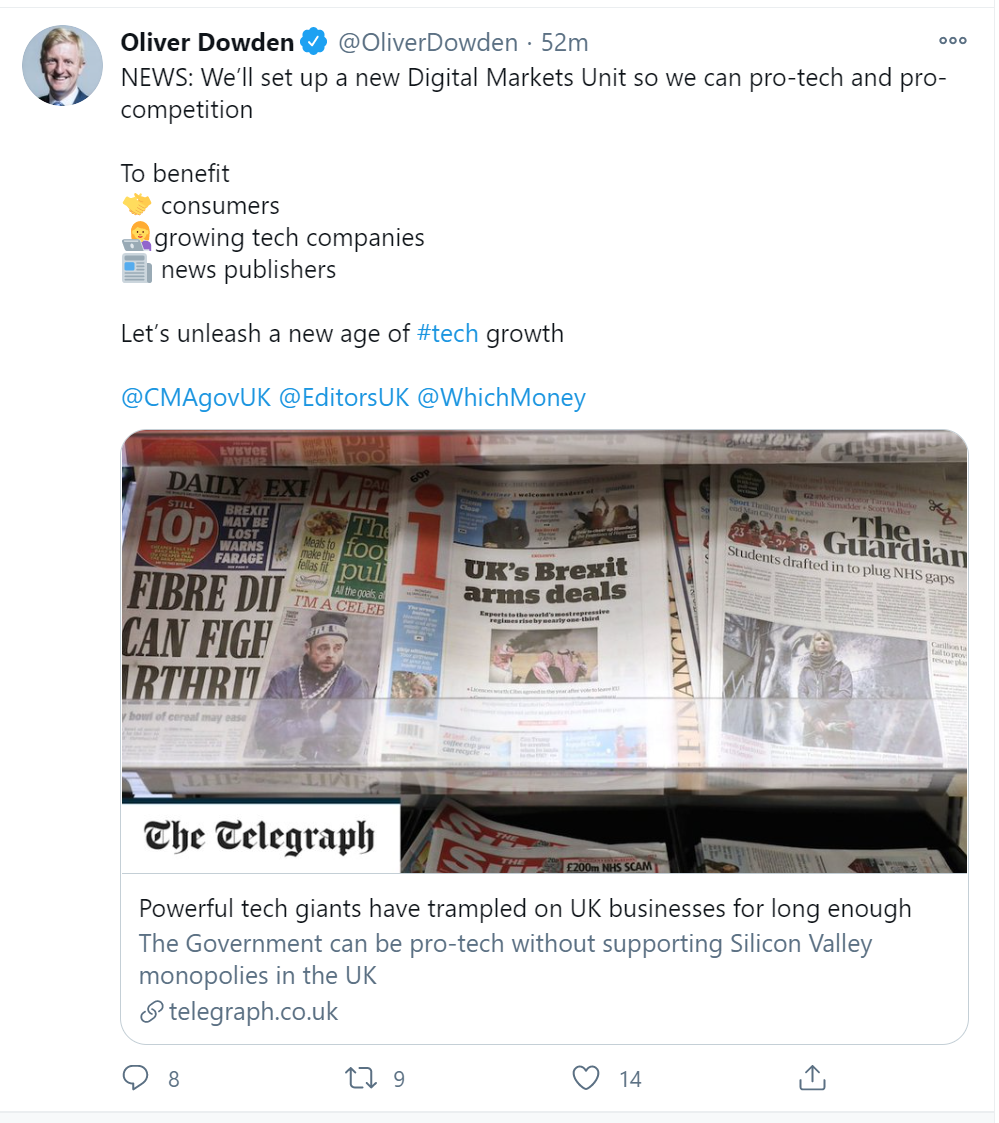 Vanessa Chalmers has been appointed Health Reporter for The Sun.

Adam Payne has been appointed Political Reporter for PoliticsHome.

Greg Hurst has left The Times where he was Social Affairs Editor, Simon Murphy will replace him

James Salmon has recently left The Daily Mail where he was Associate City Editor.

Laura Silver has been appointed News Editor at PoliticsHome.

Jessica Frank-Keyes has now joined the Real Life team at PA Media as a Reporter.

Nicola Woolcock has been promoted to Education Editor at The Times.

Charlotte Williamson is joining The Sunday Times as Deputy Editor of Style Magazine.