Launch of Manchester TV to bring ‘new age of localisation’

Local TV last week launched its ninth local news channel, this time in Manchester. The Manchester channel will run 24/7, serving one million households with local segments from 6-9am, 1- 2pm and 6-8pm. Chairman David Montgomery, who recently acquired local newspaper group JPI Media (titles including The Scotsman and Yorkshire Post), has promised to bring a “new age of localisation” into local news with his TV network.

Montgomery’s Manchester TV launch forms part of his new Northern TV Network, with channels in Newcastle and Liverpool already up and running. He said the network will “unashamedly champion the communities and the businesses of the north”, and the launch of Manchester TV was the “culmination of a £6m investment in our mission to move the TV world from the dated model of centralisation to a new age of localisation with journalists working in the heart of their communities”. Local TV’s latest figures show year-on-year audience growth of 46% largely driven by COVID-19 coverage, with a monthly reach of 1.6m. Montgomery added that although he is keeping the Local TV and JPI Media businesses separate, they share a “common strategy – a move from centralisation to localisation of news, on TV, print and online”.

Notably, JPI group editor-in-chief Jeremy Clifford and several other group management staff have already left the business following Montgomery’s pledge to decentralise, put decision-making back in the hands of local editors, and take a step away from what he described as the “one-size-fits-all approach” of its rivals including “irrelevant or clickbait stories”.

Subscription to the BBC?

The BBC has hinted that it could be launching a subscription model for its global news services after seeing other news providers try it with “significant success”. BBC Global News, which provides international English language news services overseas via the BBC World News channel and BBC.com, has generated annual revenues of around £115m for the past five years. But its financial model, based on advertising sales and licensing to other media companies that offer its channel to their subscribers, is under pressure due to “changes in the way people access news and downward pressure on global advertising revenues”, according to a financial report published on Wednesday.

Investment in English-language news in countries such as Russia and China has squeezed the BBC’s opportunities, and the pandemic has had a “dramatic impact” on its ability to generate income for its global news service despite demand being higher than ever before, a challenge faced by many online news providers amid an advertising slowdown and keyword blocking of coronavirus-related stories.

Likewise, there is news this week that magazine publishers are increasingly launching membership programmes to build on the growing subscription numbers many have seen during the pandemic. Both Bauer, one of the UK’s biggest magazine groups, and Bath-based specialist health and wellbeing publisher Anthem, have hedged their bets on membership schemes last month, suggesting this could pave the way for the BBC.

Readers may remember that last week we featured Daily Express Editor-in-Chief Gary Jones’s interview on the BBC’s Media Show where he outlined how he wants his paper to reflect multicultural Britain, including a “complete change of direction” away from its reputation of “dodgy weather forecasts and an anti-immigrant stance”. Well, Jones is today making good on his promise by launching a campaign to help save Britain’s environment and give a £21billion boost to the economy, by calling on the Government to scrap VAT on green products and to make more space for nature.

Supporters so far include the National Trust, RSPB, The Wildlife Trusts, WWF, Greenpeace Friends of the Earth, the British Trust for Ornithology plus industry bodies such as Solar Energy UK and the Federation of Master Builders. The paper claims that Brexit has given the Government the “perfect opportunity” to reform VAT, as previously it claimed that EU rules stopped it from unilaterally lowering VAT but Brexit means Britain now has a free hand.

Business Insider is dropping the “Business” part of the name in a new major expansion plan. However, business will still remind as a “core” part of its strategy, tweets Oliver Darcy, senior media reporter for CNN this week. 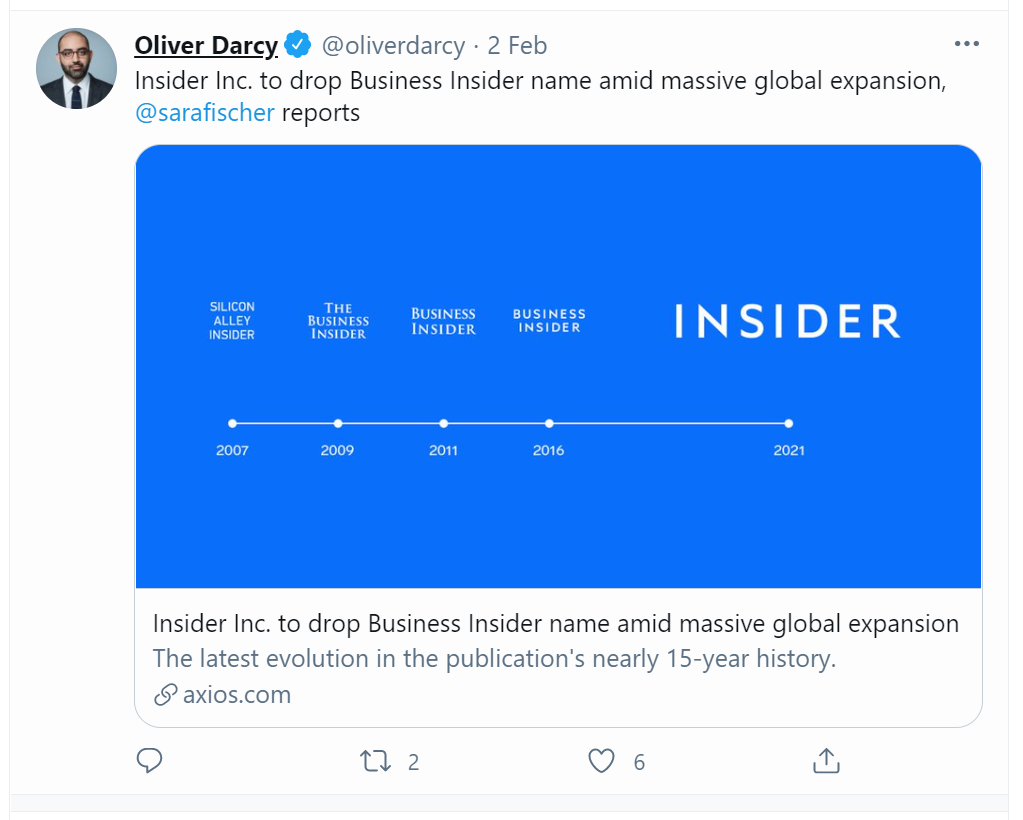 Merope Mills has been appointed Editor of The Guardian’s new Saturday magazine launching later in 2021.

Aubrey Allegretti is joining The Guardian’s lobby team as a Political Correspondent.

Liam Coleman has joined The Sun as a News Reporter.

Siobhan Riding has joined HM Treasury as a Policy Adviser. Siobhan was previously the FT’s Asset Management Reporter and contributed to FTfm.

Xantha Leatham has been appointed a Health and Science Reporter at The Daily Mail.

Marianne Guenot has been appointed a Science Reporter at Business Insider.