The Guardian recorded its biggest ever day for traffic on Wednesday as US election results started coming out, with 190m page views and 52.9m unique browsers worldwide in 24 hours. The news website exceeded all its previous traffic records by an enormous margin – more than double the previous highest ever recordings, which included the announcement of EU COVID-19 lockdown on 16 March, the UK lockdown on 23rd March, and the day after US election on 9 November 2016. The paper’s live results tracker alone has received over 94 million page views so far since it launched. It remains to be seen whether The Guardian can convert the this traffic into paid-for subscribers and revenue

And The Guardian isn’t the only one, The New York Times’ flagship podcast The Daily revealed this week it’s attracting 4m listeners a day, and is ‘almost twice as large as the paper was at its peak’, despite being only four years old. The Times’ CEO said it ‘drives affinity’ with listeners and is boosting the NYT’s brand, especially among the notoriously hard to reach younger audiences. The New York Times has made a significant investment into audio media in recent years, and its third-quarter results also revealed this week that it currently has more than 7m subscriptions, of which more than 6m are digital-only. Subscriptions to main rival Wall Street Journal meanwhile were also reportedly up 19% year-on-year to 3.1m during the quarter.

The audio sector has played an important part keeping audiences informed and entertained during the pandemic, and is currently enjoying a renaissance. Record listening figures during lockdown months saw 313 million plays of content on BBC Sounds, including Emily Maitlis and Jon Sopel’s Americast, and Louis Theroux’s podcast Grounded. RAJAR’s lockdown survey revealed that listening figures increased rapidly in the immediate weeks of lockdown in March, despite an ad market that’s not forecast to recover fully until 2022.

Facebook and Twitter have both this week placed warnings on contentious messages posted by outgoing US president Donald Trump. During a tumultuous week of reporting with the election result delayed, Trump tweeted: “We are up BIG, but they are trying to STEAL the Election. We will never let them do it. Votes cannot be cast after the Polls are closed!” Despite being widely reported in the press, Twitter obscured the tweet with a message that said: “Some or all of the content shared in this Tweet is disputed and might be misleading about an election or other civic process.”

Social media platforms have been under increasingly pressure to clamp down on misinformation and fake news during the pandemic. Amazon and YouTube were this week hauled in front of the Digital, Culture, Media and Sport Committee and quizzed on their role in fact-checking. Meanwhile, Twitter has also followed Facebook and YouTube in this week permanently suspending the account of the conspiracy theorist David Icke, stating that Icke had violated its rules regarding coronavirus misinformation.

Daughter-in-law of media mogul Rupert Murdoch this week weighed in on the debate around voter fraud surrounding the US election. The i reports that earlier this week Fox News owner Rupert Murdoch spoke to Trump and told him that he had lost, and that Biden was going to emerge as the clear winner, which Trump did not accept. Murdoch’s backing for the President has been scaled back substantially in recent months as concerns grew about Trump’s erratic performance and handling of COVID-19. 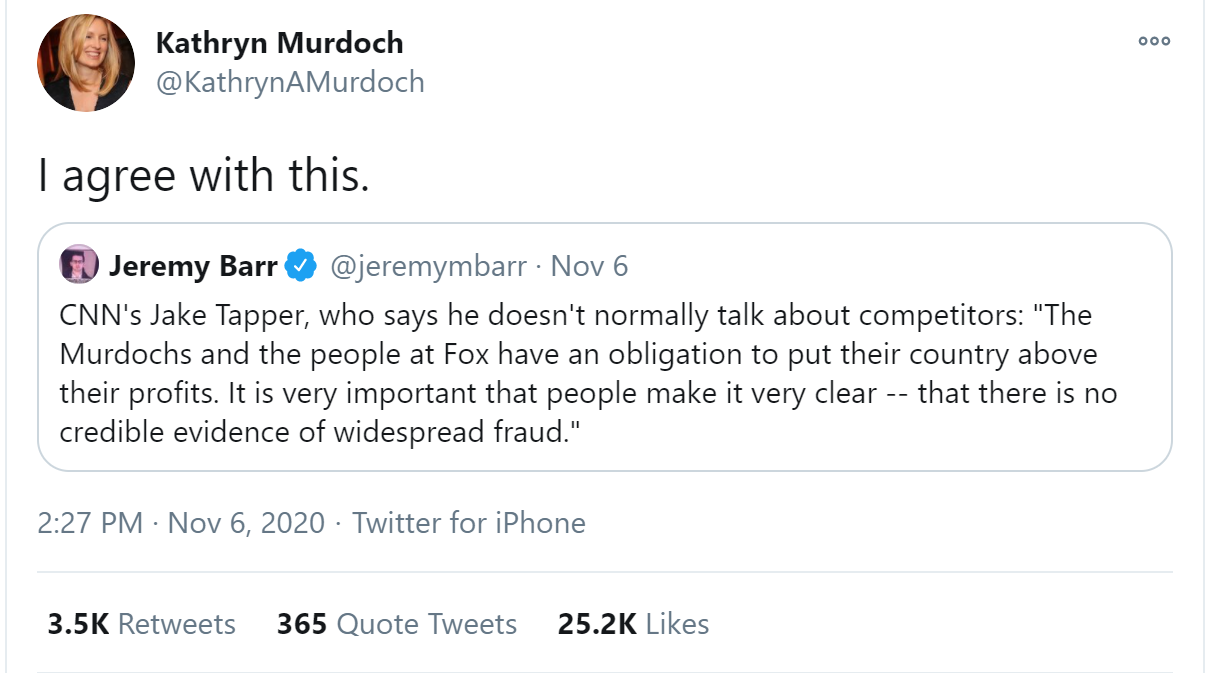 Oliver Ralph has been appointed Breaking News Editor at the Financial Times.

Robbie Smith has been promoted to the role of Editor of the Evening Standard’s ‘Londoner Diary’.

Katie Glass is joining The Sunday Telegraph’s Stella Magazine as a Columnist.

Alex Diggins has joined The Daily Telegraph, writing for the Culture Desk.

Andrew Hosken has left the BBC after a career spanning 30 years as a reporter.

Daisy Dunne has now joined The Independent as Climate Correspondent.

Hannah Godfrey has started at City A.M., covering the audit and legal sector.

City A.M. Editor Christian May announced he is leaving the paper and journalism, meaning Deputy Editor Andy Silvester, will step up as Acting Editor.