Welcome to Lexington’s weekly round-up of media news and the latest moves in journalism.

A study in Fake News

Analysis of the social media accounts of the Conservatives and Labour during the general election campaign reveal that Labour’s activity was more prolific – tactics which clearly didn’t translate into seats.

The analysis of the leaders’ ‘fake news’ claims and social media shares revealed how the election was won and lost on social media. The Labour campaign featured sites to help voters amongst the top links shared including the party’s ‘polling station finder’, Labour campaign events and Labour’s Fair Tax Calculator.

The report covered activities of successful Conservative and Labour candidates through tracking the campaign across social networks and other web sources from 6 November, when parliament was dissolved, to polling day on 12 December. 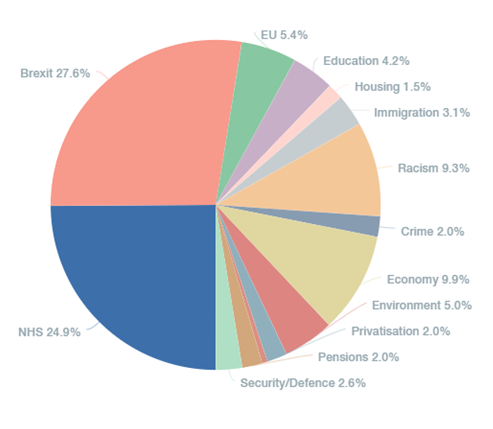 Brexit and NHS were two of the biggest topics also being discussed by Conservative and Labour candidates respectively. The question of racism, particularly around antisemitism and islamophobia, featured less heavily in the candidates’ discussions than it did in the public debate.

A link to encourage voters to ‘register to vote’ before the deadline was shared over 100 times on the Conservative channels, which contrasts starkly with the same link being shared over 2,500 times by Labour candidates. This echos the familiar mantra that Labour is far more concerned with boosting voter turnout among young people on social media.

It’s the sound of the Cyber Police

The UK competition watchdog, the Competition and Markets Authority, has called for the creation of an online platforms regulator and code of conduct. The regulator would oversee the activities of digital ad-funded online platforms in a bid to create a “valuable tool in improving transparency and hence trust in the market”.

The findings could give the new regulator powers to audit the workings of “opaque algorithms”, which can cause havoc for online publications whose revenue is dependent on Google search engine optimization (‘SEO’). Online publications have long blamed these algorithms for acting as a gate-keeper to the amount of traffic media websites receive. For news sites who make their margins through online adverts, where you appear on Google’s result pages is crucial.

Netflix has long kept its international membership figures under lock and key, but has this week revealed for the first time how many members it has region by region.  The broadcaster’s biggest market by members is still the US and Canada, but Europe, the Middle East and Africa are hot on its heels. EMEA growth figures are up 40% from the previous year versus just 6.5% growth in the US and Canada.

Netflix has recently relaxed about reporting viewership stats in the wake of rising competition from Disney Plus and Apple TV Plus. We can expect a report on the final quarter of 2019 earnings in January, which will start detailing these revenue and membership figures by region from now on.

Boris Johnson has written his first article for the Spectator Diary since becoming PM, tweeted out by the Editor of the paper: ‘Perhaps my campaign was ‘clunking’. But sometimes, clunking is what you need’…

Here’s Boris Johnson’s diary, the first Spectator article from a serving PM since Gladstone’s letter of 1872* https://t.co/THV3Jnzk8b (*Thanks to Prof David Butterfield for that factoid)

Lucy Webster will be starting a new role as a Reporter with BBC Politics online in January. She previously worked on BBC Two’s Newsnight programme.

Madeleine Cuff will be joining The i Paper as an Environment Reporter in late January. She is currently Deputy Editor at BusinessGreen.com.

Katherine Denham starts this week on The Times / The Sunday Times Money desk as a Money Reporter. She was previously Features Writer at City A.M. covering personal finance and trading.

Harry Taylor will shortly be leaving his role at Ham&High to join The Guardian as a Night News Sub-Editor.

The Evening Standard has appointed Daniel O’Mahony as night news editor. Daniel was previously a reporter at the newspaper.

If your organisation needs communications advice, or you would like more information about how Lexington’s team of media experts can support you, please contact Lydia.Willgress@lexcomm.co.uk .

To get our media round-up in your inbox every Monday, please email communications@lexcomm.co.uk.