As part of Ofcom’s 2020 News Consumption in the UK study, the regulator asked around 500 12-15-year-old children about their use of news content across different platforms and their attitudes towards that content during the COVID-19 outbreak.
Interestingly, children were more likely to turn to traditional sources, including BBC News, than social media for their pandemic information.

The online survey took place between 1st and 20th April, during weeks three and four of the lockdown. The key findings were: 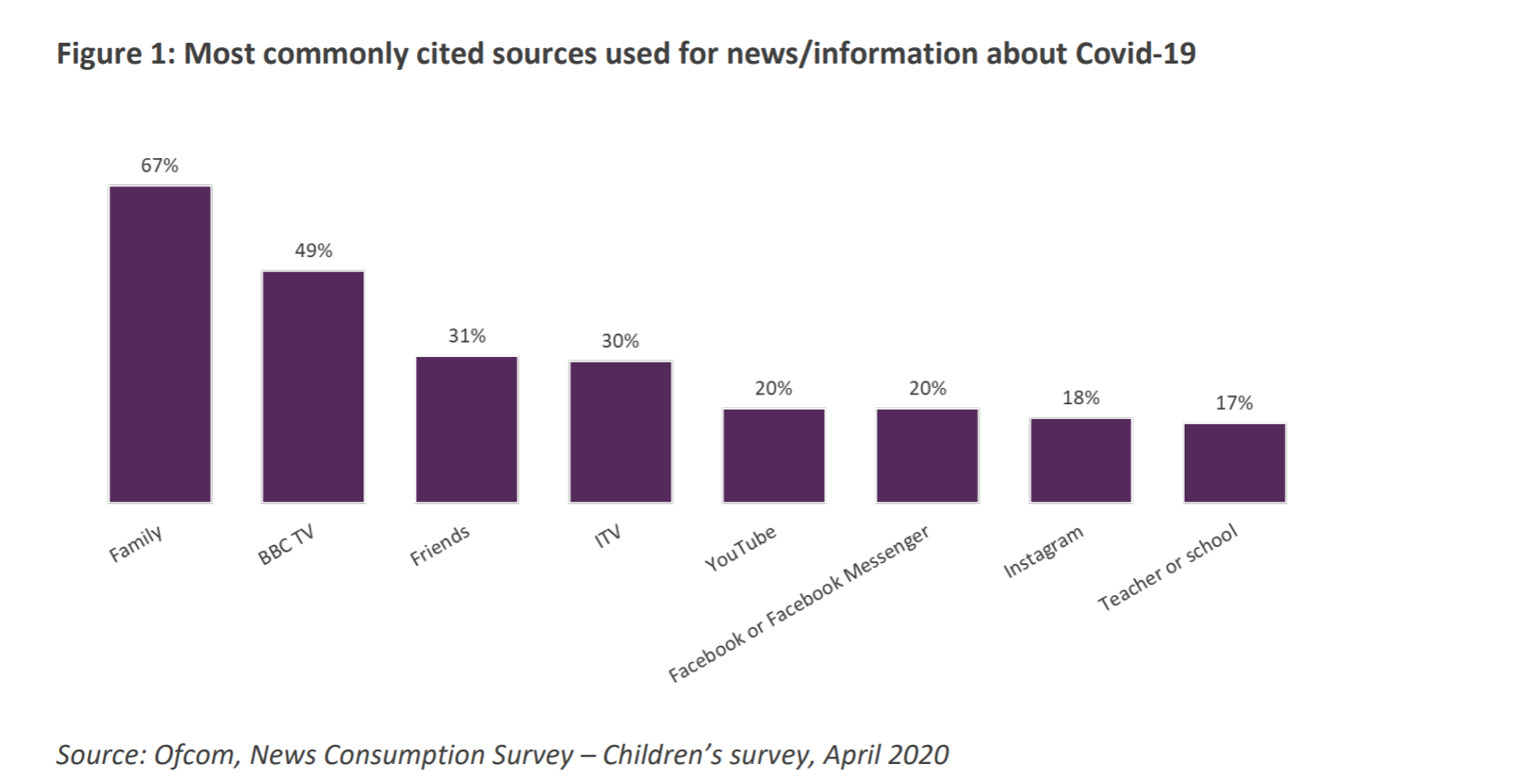 Thousands of households are cancelling their TV licences every month as viewers decide they can live without the BBC, according to The Times. The number of licences across the UK fell by 82,000 in the five months to March, according to data disclosed by the broadcaster in response to a freedom of information request. There are now about 25,525,000 homes with TV licences, down from 25,607,000 last November and the lowest figure since 2014-15.

Mail, Metro and i offer £3m of free ads

The Mail, Metro and i titles are offering £3m worth of free advertising to small businesses who are struggling to stay afloat because of the coronavirus crisis. The Daily Mail and General Trust (DMGT) is offering £3,000 worth of advertising each to 1,000 companies. The adverts will appear across DMGT’s four print titles, including the Daily Mail and MailOnline, with additional online space on the Metro, and newly acquired i paper websites.

The Daily Mail recently bought £1m worth of protective coverage masks from China, which it airlifted overnight for frontline hospital staff. Health Secretary Matt Hancock tweeted at the time, calling the move a ‘brilliant initiative in our national effort to tackle #coronavirus’.

BuzzFeed pulls out of UK and Aus

BuzzFeed is to end its news operations in the UK and Australia, with most of its staff being temporarily furloughed before facing redundancy. The website will instead focus on news that “hits big” in the United States, which will require retaining 11 of its British staff.

Like other news outlets, BuzzFeed faced both the long-term decline of news advertising revenue, and the short-term hit caused by COVID-19. But unlike most broadsheets, which have successfully used paywalls to generate income, BuzzFeed’s casual appeal and young audience required it to be free to read. But even before the crisis, the website had been struggling, making 23 British editorial staff redundant in 2018.

BuzzFeed is best known for its snappy, accessible stories, as well as its numerous quizzes, which are widely shared on social media. The most famous example of this was ‘the dress’, a picture of a dress which is either black and blue, or white and gold, depending on the viewer’s perspective. But since its UK political operation began six years ago, it has conducted important journalism, such as its report into 14 deaths in the UK which were linked to Russia. However, there have still been questions over its reliability, with American millennials ranking it as one of their least trusted news sources.

Commercial, community and BBC radio stations across the UK are again uniting for a Mental Health Minute, broadcast at 10.59am today, featuring famous voices including Wills and Kate, Harry Kane, Anthony Joshua and Dua Lipa. The Mental Health Minute sees stations join together to broadcast a special one minute message on the importance of talking about mental health issues, last year reaching more than 20 million people broadcast across 500 radio stations.

Commercial radio has reportedly peaked with a new high of 36.3m weekly listeners, pulling in an average of 2.7 million more listeners per week than BBC radio. It was also reported that Zoe Ball’s BBC Radio 2 show has lost one million weekly listeners since she replaced Chris Evans as presenter of the UK’s most popular breakfast programme.

UPDATE:
* BBC Breakfast had its lowest viewership yesterday since Jan31.
* GMB’s had its 2 highest ever audience shares over past 2 days.
* Gap between 2 shows is now the closest ever.
Thanks for switching everyone!
cc @mrdanwalker https://t.co/m4XjAO70Lf

Coronavirus is changing the way we do everything in life – from shopping to socialising to going to work.

Communications is no exception – and for politicians and business leaders, a key challenge over the last few months has been what to say and how to say it at a time when there is no good news to talk about and when the main activity is ‘putting out fires’? Some organisations have done a stellar job engaging with audiences; others have found themselves in the firing line for failing to be honest or transparent. What’s clear is that people want clarity and information from those in positions of authority, even it is bad news.

So what happens next? Is this a defining moment for communications? Is it the end of spin? Join Lexington’s corporate communications practice to discuss these questions and many more at our webinar on 27th May at 11am. Email communications@lexcomm.co.uk to secure your place. 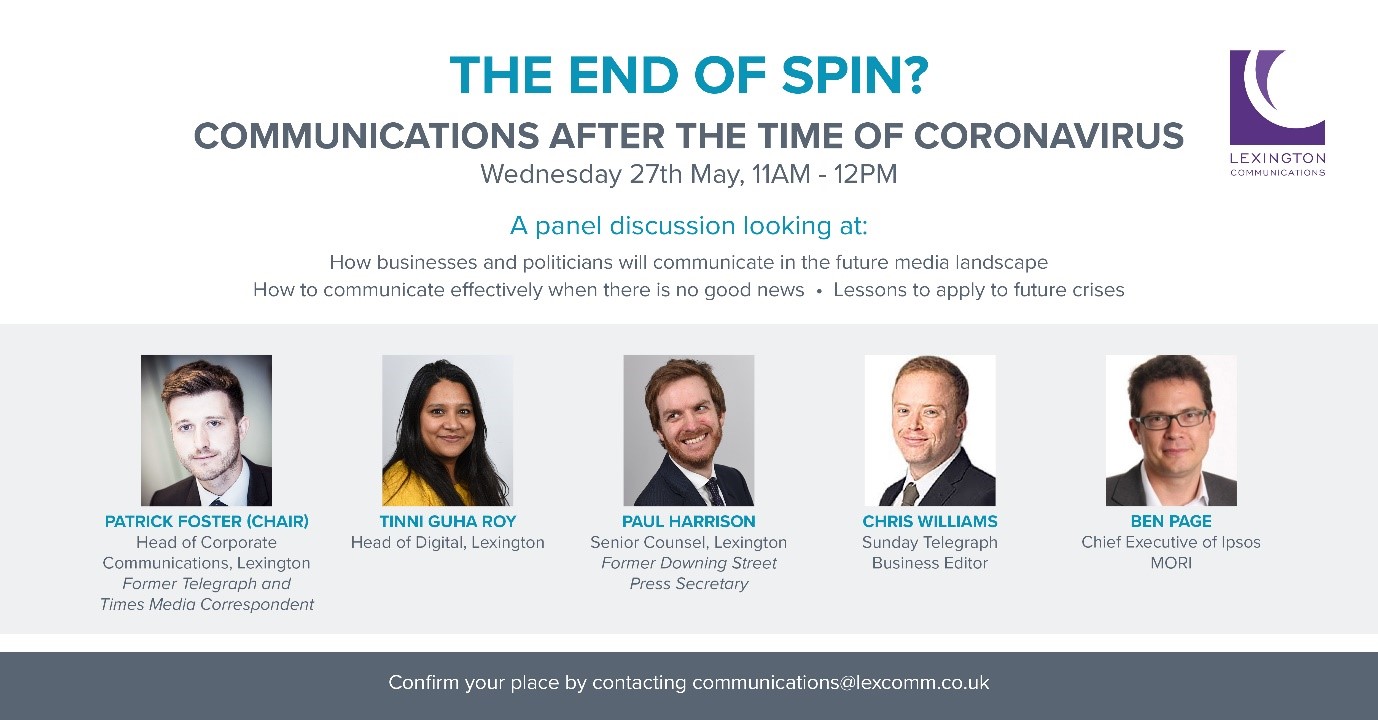 Patrick Maguire will be joining The Times next month to work alongside Esther Webber on Times Red Box. He is currently a Political Correspondent at the New Statesman.

The Sun‘s Political Editor Tom Newton Dunn has confirmed his upcoming departure from the paper to join Times Radio as a Presenter and Chief Political Commentator in the summer. His replacement at The Sun in the Political Editor role will be Harry Cole, currently Deputy Political Editor at the Mail on Sunday.

Daniel Sanderson has joined The Daily Telegraph as Scotland Correspondent. He was previously a Reporter at The National (UAE).

George Grylls has joined the political team at The Times. He was previously an Anthony Howard Award winner at the New Statesman.

Emily Andrews has been appointed Royal Editor at The Mail on Sunday. She was previously a Royal Correspondent at The Sun.